Every time I find what I think must be the stupidest possible alt-med quack "cure," the alt-med crowd says, "Hold my beer."

But this one is the odds-on winner for the 2018 "How Gullible Can You Get?" Award: slapping therapy.

The idea here, which comes out of Traditional Chinese Medicine, is that if you're sick, the flow of chi through your meridians is stuck, and what you need is to jar it loose, similar to when you smack the bottom of a ketchup bottle to get the last bit out.

But I'm not talking about a few little love-taps, here.  This is one patient following a "treatment:" 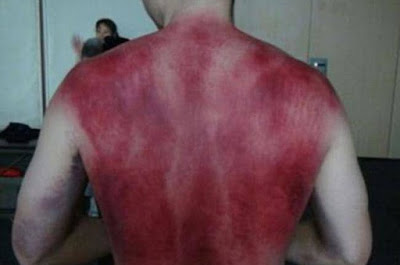 The link I included above, which is to Frank van der Kooy's outstanding blog about scientific charlatans and medical quackery, describes a darker side of this kind of bullshit.  A six-year-old Australian boy with type-one diabetes, Aidan Fenton, was brought by his parents to a "self-healing course" run by Hongchi Xiao, and subjected to slapping therapy.  Xiao charged each participant $1,800, smacked their bare skin, and told them they could not receive ordinary medications during the "therapy" because it would "interfere with the flow of chi."

The boy, deprived of his insulin, went into hyperglycemic shock.  He was rushed to a hospital, but could not be revived.

The only positive note is that Xiao is being charged in the boy's death, and it's possible charges of negligence will be brought against the parents as well.

Let me cut to the chase, here.  There is absolutely no rigorous evidence of "chi" and "meridians," much less that something like a slap could change it somehow with beneficial results for your health.  If you don't take my word for it -- and you shouldn't, as I'm a layperson at best with respect to medical claims -- take a look at this article from way back in 1995 by Peter Huston, who has researched Traditional Chinese Medicine extensively.  It's fair and thoughtful -- and comes to the inevitable conclusion that there is no evidence for it whatsoever.  (This takedown of TCM in The Skeptic's Dictionary is equally unequivocal, and not nearly so gentle.)

So once again, we're faced with the objection of "what's the harm?" having a very specific answer.  The principle of caveat emptor should apply -- if someone who is ill wants to try a crackpot cure, that's their choice -- but when a child's life is at risk, the moral calculus changes.  In this case, it's criminal negligence at the very least.  And quacks like Hongchi Xiao need to be put out of the way for a long, long time.