One of the most common misunderstandings about science by laypeople centers around the concept of degree of confidence.

This misunderstanding can be summed up that "all unproven hypotheses are equally likely."  You hear it with lots of loopy ideas -- that (for example) because we don't have strong evidence one way or the other regarding the existence of an afterlife, it's on the same footing as other phenomena for which we have no direct evidence, such as dark matter, time travel, and the claim we've been visited by extraterrestrials.

Another way this shows up is the dismissive, "all of this could be proven wrong tomorrow" attitude toward science.  The fact that new discoveries have on occasion overturned what we thought we understood is taken as evidence that all of science is on thin ice, that it's all equally tentative.  But this rests on a serious misapprehension about the reliability of evidence.  It's true that, as Einstein allegedly put it, "one experiment could prove wrong" either the Second Law of Thermodynamics or our understanding of the mechanisms of quantum entanglement, the first is extremely unlikely (the Second Law is one of the most extensively-tested scientific principles known, and there has never been a single exception found to it) while even the physicists would admit the second is a possibility (we're still elucidating the idea of quantum entanglement, and new and intriguing data is being added to our understanding on nearly a daily basis).

This frustrates people who like to have certainty, or at least like to be able to say with confidence that something isn't possible.  I ran into an especially good example of this just yesterday when I was reading an article about the Younger Dryas, a mysterious climatological reversal that occurred 12,900 years ago and lasted only 1,200 years -- a mere blip on the geological time scale.  What happened was that during a period when the Earth was warming, in only a few decades the average temperature of the Earth dropped by an average of four degrees Celsius, enough to put most of the Northern Hemisphere back in the deep freeze.  (The event is named after a plant, Dryas octopetala, which only grows in extremely cold places, and which became common across Europe and North America through the duration of the temperature drop.) 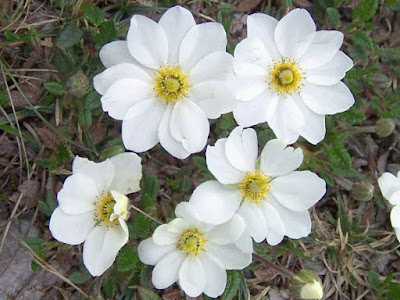 Of course, presented with such a conundrum, the first question that comes up is "Why did this happen?"  There are three main hypotheses:
Each has some points in its favor.  The ice-dam proponents argue that the temperature drop wasn't as fast as you'd expect from something catastrophic like a collision or supernova, and that in fact the extinctions that occurred were in species that had already been declining for millennia.  Scientists supporting the impact hypothesis were buoyed by the discovery of a previously-unknown crater in Greenland -- but they've been unable to pinpoint its age any more accurately than "some time between three million and twelve thousand years ago."  The supernova enthusiasts point to the existence of "black mats" -- thin layers of the remnants of anaerobic organisms -- as evidence that something drastic happened to the atmosphere at the beginning of the Younger Dryas, and samples taken from it do seem to have skewed nitrogen content.  (This same evidence is considered support for the impact hypothesis, because there have been "microspherules" -- tiny spheres of melted and refrozen metal -- found in some of those boundary layers.)  But the black mats in different locations seem to date from different time periods, with only three of the thirteen studied being coincident with the Younger Dryas event.  And most of the black mats studied don't contain microspherules.

So the argument is still out there.  As far as my own opinion, I can only say that I'm neither a paleoclimatologist nor an astrophysicist, so am unqualified to weigh in (and my opinion wouldn't mean much anyway).  It seems like the dam collapse model is the one that currently has the most support, but -- like all science -- new information could tilt us toward one of the others.

Why does this come up with regards to our confidence in scientific models?  Not only because it's a great example of competing explanations and the fact that good scientists are willing to entertain the possibility of alternate solutions to the conundrums they study.  The idea for this post came to me because of another twist on the Younger Dryas -- this one from noted wingnut Graham Hancock, who says that the Younger Dryas event not only inconvenienced the camels and dire wolves, it also wiped out an advanced technological civilization...

... which gave rise to the myth of Atlantis.

So this is what I mean about levels of confidence.  No, we haven't been able to rule out two of the three models for the cause of the Younger Dryas with any real certainty.  But the fourth idea -- that whatever caused the event also destroyed Atlantis -- has nothing, not a shred of evidence, to support it.  As the brilliant skeptic Jason Colavito put it:


[R]egardless of whether a comet hit, the existence (or non-existence) of the comet implies nothing about the existence of Atlantis any more than it would unicorns or leprechauns.

It remains a point of astonishment that the bones of megafauna that supposedly died in the comet strike turn up with regularity, but every human being and all of the buildings, tools, and material possessions of the lost Atlantis-like civilization were blasted clean off the face of the Earth, without a single trace remaining.  I have trouble imagining that a sloth can manage to have its bones preserved for all time, but not a single outpost of Atlantis had even a single bolt or screw remain.

As do I.  All unproven assertions are not on an equal footing.  And that's really the point of Ockham's Razor, isn't it?  The fastest way to winnow down competing ideas is to see which ones require you to make the most ad hoc assumptions.  And I'd put any of the three scientific explanations I mentioned above ahead of Hancock's assertion that the Younger Dryas event destroyed the lost civilization of Atlantis.

I'm perfectly willing to stay in uncertainty, indefinitely if need be, in the absence of convincing evidence one way or the other.  But in the case of explanations that require us to stretch credulity to the snapping point, I have no problem saying, "Nope.  That one isn't true."