Today I'm going to write about a piece of research that isn't controversial, or deeply thought-provoking, or politically relevant, but because it's just plain awesome.

It's from the realm of paleontology, and is about a gigantic carnivore, which is part of its appeal.  Have you noticed how the little-kid fascination with dinosaurs usually revolves around carnivorous ones like Velociraptor and Tyrannosaurus rex?  They're seldom as impressed by herbivores like Pachycephalosaurus, which also has the disadvantage of meaning "thick-headed lizard," so it's kind of unimpressive right from the get-go.  Velociraptor, though?  "Swift hunter?"  Now that's cool.  You can bet that those wicked pack-hunters would never have put up with being given a humiliating name.  I bet if the paleontologists had decided to name them Brocchodentidorkosaurus ("buck-toothed dorky lizard"), the raptors would have eaten them for lunch, and that's even considering the fact that they've been extinct for seventy million years.

The dinosaurs, not the paleontologists.

The subject of today's post is a mammal called Simbakubwa kutokaafrika, which means "humongous lion from Africa" in Swahili (speaking of impressive names), even though it wasn't a lion at all.  It was a hyaenodont, a predatory group of mammals that are in Order Creodonta, a group only distantly related to modern Order Carnivora (i.e., cats, dogs, bears, weasels, seals, and a few other families).  The creodonts are an interesting group, at least to evolutionary biologists, because there's still a major argument going on regarding how to assemble their family tree.  Some paleontologists believe they're monophyletic -- all descended from a single common ancestor -- while others say they're polyphyletic, with different groups of creodonts coming from different ancestors that were further apart on the mammalian clade.

Whichever it is, they've now been shown through detailed skeletal analysis to have a closer connection to the bizarre pangolins than they do to today's carnivores -- yet another example of how common sense can lead to the wrong answer. 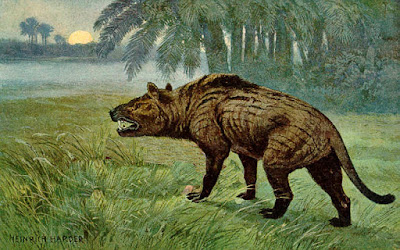 In any case, Simbakubwa was discovered recently by Duke University paleontologist Matt Borths, who was going through some fossils in the back rooms of the Nairobi National Museum when he found something that made him sit up and take notice:

The remains of a carnivorous mammal that was an estimated 1.2 meters tall at the shoulder, 2.4 meters from tip to tail, weighed an estimated five hundred kilograms, had canine teeth the size of bananas, and had three sets of incisors, two of which were big, nasty, and pointy.

That, my friends, is one serious carnivore.  That's a carnivore that could have turned your average African lion into an African lion meatloaf.

All of this highlights two things -- first, what amazing discoveries might be lurking on dusty museum shelves, forgotten and unstudied; and second, that we honestly don't know very much about what critters were out there in prehistoric times.  The conditions required for generating a fossil are thought to be mighty uncommon -- most animals don't leave any traces at all, only a few years after they die, so it's likely that the vast majority of the living things that have ever existed aren't represented in today's fossil record.

So the number of species we know about are far outnumbered by the ones we don't know about.  Meaning that as bizarre, fascinating, and wonderful as are the prehistoric animals we've classified, if we were to time-travel back to whatever epoch you choose, we'd find ones more bizarre still.  And that's even including a banana-fanged predator the size of a polar bear.

All of which puts me in mind of the last sentence of Charles Darwin's Origin of Species, which seems a fitting way to end:


There is grandeur in this view of life, with its several powers, having been originally breathed into a few forms or into one; and that, whilst this planet has gone cycling on according to the fixed law of gravity, from so simple a beginning endless forms most beautiful and most wonderful have been, and are being, evolved.

Posted by Gordon Bonnet at 4:51 AM