Whales, fossils, and the limitations of commons sense

One of my favorite things about science is its ability to jolt us out of our preconceived notions.

We all have common-sensical ideas about how the universe works, and they allow us to function pretty well most days.  The problem is, some of them are correct and some of them are wildly wrong, and how do you tell which is which?  As physicist Sean Carroll eloquently puts it, in his wonderful book The Particle at the End of the Universe:


It's only because the data force us into corners that we are inspired to create the highly counterintuitive structures that form the basis for modern physics...  Imagine that a person in the ancient world was wondering what made the sun shine.  It's not really credible to imagine that they would think about it for a while and decide, "I bet most of the sun is made up of particles that can bump into one another and stick together, with one of them converting into a different kind of particle by emitting yet a third particle, which would be massless if it wasn't for the existence of a field that fills space and breaks the symmetry that is responsible for the associated force, and that fusion of the original two particles releases energy, which we ultimately see as sunlight."  But that's exactly what happens.  It took many decades to put this story together, and it never would have happened if our hands weren't forced by the demands of observation and experiment at every step.

That's why I find it frustrating when someone says, "Oh, that can't be right, it sounds ridiculous," and forthwith stops thinking about it.  We've seen over and over that "sounding ridiculous" is not a reliable indicator of the truth of a claim.  The only acceptable criterion is hard evidence -- as long as you've got that, what your claim sounds like is entirely irrelevant.

This point comes up every year in my AP Biology class when we talk about the evolutionary history of whales.  The fossil record for whales was pretty lousy, because being marine mammals their skeletons are mostly destroyed by scavengers and degraded by seawater, not to mention the fact that many of them end up in the abyssal regions of the ocean floor.  After that, we'd only find them if those deep oceanic sediments get scooped up by the movement of tectonic plates and thrust up onto land -- something that (1) doesn't happen that often, and (2) results in significant deformation of the rocks formed, thus completely destroying any fossils that were present.

It wasn't until a fossil bed was discovered in Pakistan in the early 1980s that we actually got any data on what the ancestors of today's whales looked like.  The northern parts of Pakistan and India -- i.e., the Himalayas -- were formed in exactly the way I've described above.  We lucked out, though, because at least one rock formation not only has ancestral whale fossils, but ones that survived in reasonably good condition.

Now, here's the counterintuitive part; the fossils found in Pakistan and India have conclusively shown that the nearest living non-cetacean relatives of whales are hippos...

This is the point where people look at a picture of a blue whale and a white-tailed deer and say, "Hang on a moment.  That can't be right."  But it is -- as confirmed not only from the fossil record, but from extensive genetic studies.

We just got further confirmation of this relationship from an entirely different fossil bed -- this one from mid-Eocene (i.e., about forty million years old) rocks in Peru.  A team led by paleontologist Olivier Lambert, of the Institut Royal des Sciences Naturelles de Belgique, has discovered not only a new species but an entirely new genus of proto-cetaceans.  Called Peregocetus pacificus, it catches whale evolution right in the middle between the terrestrial ancestors and their aquatic descendants. 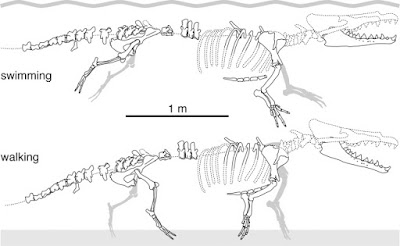 
[T]his unique four-limbed whale bore caudal vertebrae with bifurcated and anteroposteriorly expanded transverse processes, like those of beavers and otters, suggesting a significant contribution of the tail during swimming.  The fore- and hind-limb proportions roughly similar to geologically older quadrupedal whales from India and Pakistan, the pelvis being firmly attached to the sacrum, an insertion fossa for the round ligament on the femur, and the retention of small hooves with a flat anteroventral tip at fingers and toes indicate that Peregocetus was still capable of standing and even walking on land.  This new record from the southeastern Pacific demonstrates that early quadrupedal whales crossed the South Atlantic and nearly attained a circum-equatorial distribution with a combination of terrestrial and aquatic locomotion abilities less than 10 million years after their origin and probably before a northward dispersal toward higher North American latitudes.

So that's kind of amazing.  It also illustrates why we can't rely on "that sounds reasonable" to determine what's true.  This is just one example of how science has come up with a result that we never would have arrived at using common sense -- as helpful as that is in most ordinary situations.

Myself, I like the capacity of science to astonish us.  It would be incredibly boring if the universe turned out to work exactly the way we thought, that our minds are perfect little windows through which we perceive everything right the first time.

Much better to be reminded of our limitations -- and to have such a powerful tool to check our guesses, and correct us when we're wrong.