Seems like I've been writing a lot about the skies lately.

My general opinion is that what's going on up there is not only interesting, it's useful in taking my mind off the shitshow that's going on down here.  Be that as it may, in the last few weeks we've seen new discoveries about dark energy, a likely nearby supernova candidate, neutron stars, and the possibility of extraterrestrial life in unlikely places.  The astronomers and astrophysicists have been kept on their toes lately by the number of new discoveries and surprising observations -- in fact, in today's post, we'll take a look at not one, but two more pieces of news from above.

In the first, a team at the European Space Agency was working on mapping stellar positions in the "Gould's Belt," a ring of stars surrounding the Milky Way but tilted at about twenty degrees away from the galactic plane.  And what the team found was that within the Gould's Belt, there is a huge structure (from our perspective here on the Earth, it extends across half the sky) that shows regular up-and-down periodicity -- an enormous wave with a wavelength of about six thousand light years.

What could have created this structure is unknown, but waves are usually created when something gravitationally perturbs the pre-existing structure, so astronomers are trying to find something massive enough to cause a pattern change on this scale.  There don't seem to be any good candidates, so the current guess is that (once again) we may be talking about a clump of dark matter.

Whatever the hell that is.

"But this is very speculative at the moment, and other scenarios are as plausible, as an accretion of gas either from the halo of the Milky Way, stretched by the tidal forces of the galaxy (hence its narrowness)," said study lead author João Alves of the University of Vienna.  "Or maybe this is what spiral arms look like up close.  In summary, we have many ideas that we will be testing with future releases of Gaia data but we don't have a favorite scenario at the moment, and that is pretty exciting."

Another odd feature is the the wave is "damped' -- its amplitude decreases along its length.  This suggests that whatever created the disturbance interacted with the stars in the Belt and then passed on -- much like the waves from a rock dropped into a pond decrease in amplitude as they move outward.  It turns out that the Sun was passing through the belt about thirteen million years ago, but if it caused anything untoward here on Earth, it's left few traces.

"There was no obvious mass extinction event thirteen million years ago, so although we were crossing a sort of minefield back then, it did not leave an obvious mark," Alves said.  "Still, with the advent of more sensitive mass spectrometers, it is likely we will find some sort of mark left on the planet."

The second story is about another upcoming stellar explosion, this one more predictable (although less spectacular) than the Betelgeuse supernova about which I wrote two weeks ago.  The star in question is V Sagittae -- which, actually, is a binary system, a white dwarf (a collapsed stellar core) and a larger main-sequence companion.  Because of the white dwarf's gravitational pull, it is siphoning off matter from the surface of its partner, and the interaction is slowing down their rotation around their barycenter, so they're getting closer -- and will ultimately collide.

When that happens, it will cause a colossal explosion which will -- even at our position, 7,800 light years away -- release so much energy that for a short while, V Sagittae will be the brightest star in the sky.  And because we know a good bit about its rotational period and the rate at which the matter is being pulled from the main-sequence star, the astrophysicists also have a good idea of when this will happen: 2083, give or take a few years in either direction. 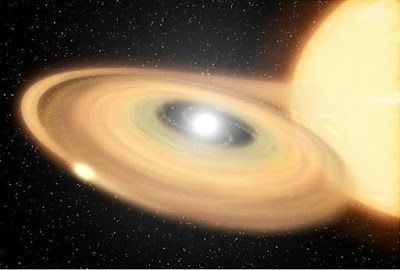 So there are people alive today who will see this happen.  Sadly, I'm probably not going to be one of them, because in 2083 I'd be 123 years old.  And even though I fully intend to live forever (so far, so good), I must grudgingly admit that the chances of my making it to 123 aren't that high.

Still, there's always the possibility of some advance in genetic engineering extending our life spans.  I'm not exactly optimistic about the likelihood of this, but hope springs eternal and all that nonsense.  And if I'm not going to get to see Betelgeuse go kablooie, then V Sagittae sounds like a decent second-best.

So that's the news from overhead for today.  It's hard not to be impressed by the strides we're making in figuring out how the universe works.  Even though we've got a lot more questions still to answer -- which, after all, is how science works -- the idea that sitting here, on a little planet around an average star in an average galaxy, we can figure all this out is pretty damned impressive.