For some of the most fundamental aspects of life, it's uncertain whether or not evolution was constrained.

This has huge implications for the search for extraterrestrial life, and whether or not we'd recognize it if we saw it.  One I've dealt with here before is the fact that terrestrial life is based on carbon -- but is that necessarily true everywhere?  Sure, carbon's pretty cool stuff, with its four snazzy valence electrons and all, but maybe there are other ways to build functional organic molecules.

What about oxygen?  Even here on Earth, we have living things that get by just fine without it; they're the anaerobes, and include such familiar fermenters as yeast and Lactobacillus acidophilus (the bacteria responsible for yogurt), and such bad guys as the causative agents of tetanus, botulism, and gangrene.  Being aerobic certainly seems like a great innovation -- it increases the efficiency of a cell's energy utilization by a factor of 18 -- but it certainly isn't a requirement.  In fact, probably the most common life form on Earth, individual for individual, are methanogens -- deep sea-floor bacteria that metabolize anaerobically and produce methane as a waste product.  By some estimates, methanogens may outnumber all other living things on Earth put together.

There are other features that deserve consideration, too.  How many of the things we take for granted about animal life are ubiquitous not because they were the result of strong natural selection, but simply because one of our ancestors had those features and happened to be the one that survived?  I'm guessing that having the sensory organs, central processing unit (brain), and the mouth clustered together at the anterior end of the animal will turn out to be common; it makes sense to have your perceptive equipment and your feeding apparatus pointing basically in the direction you're most likely to move.  And speaking of movement, that's probably going to turn out to be fairly uniform everywhere, because there aren't that many ways to fashion an appendage for walking, flying, or swimming.

But what about symmetry?  The vast majority of animals are bilaterally symmetric, meaning that there's only one axis of symmetry that divides the animal into mirror-image halves.  (A few have radial symmetry, where any line through the center works -- jellyfish being the most obvious example.)  Even animals like starfish, that seem to have some weird five-way symmetry, are actually bilateral, which is obvious if you look at starfish larva, and in fact is given away by the position of the sieve plate (the opening through which they draw in water), which is off-center.

True multiple-line symmetry doesn't seem to exist in the animal world, and even in science fiction most aliens are depicted as being nicely bilateral.  An exception are the Antarctic Elder Things, an invention of H. P. Lovecraft, which have pentaradial symmetry, if you don't count the wings -- further illustrating that as unpleasant a person as Lovecraft evidently was, he had a hell of an imagination. 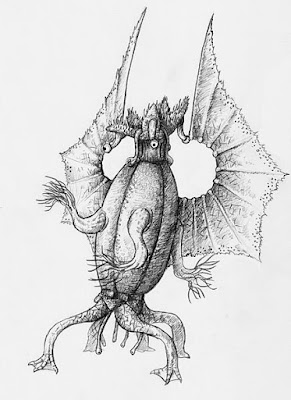 So are most animals bilateral because it's got some kind of selective advantage, or simply because we descend from bilateral creatures who survived well for other reasons?  In other words, is it selected for, or an accidental neutral mutation?

The reason all this comes up is because of a discovery in South Australia described in a paper that came out this week in Proceedings of the National Academy of Sciences.  Paleontologists have discovered a fossil half the size of a grain of rice that is over half a billion years old, and is the oldest truly bilateral animal ever found -- meaning what we're looking at may be a very close cousin to the ancestor of all the current bilateral animals on Earth.

In "Discovery of the Oldest Bilaterian from the Ediacaran of South Australia," by Scott D. Evans and Mary L. Droser (of the University of California-Riverside), Ian V. Hughes (of the University of California-San Diego), and James G. Gehling (of the South Australia Museum Department of Paleontology), we read about Ikaria wariootia, a teardrop-shaped critter whose unprepossessing appearance belies its significance.  This tiny little proto-worm might actually be our great-great-great (etc. etc. etc.) grandparent.

Not only was it bilateral, it had a throughput digestive system (two openings, one-way flow of material), another innovation that has turned out to be pretty important.  "One major difference with a grain of rice is that Ikaria had a large and small end," said study lead author Scott Evans, in an interview with The Guardian.  "This may seem trivial but that means it had a distinct front and back end, which is the kind of organization that leads to the variety of things with heads and tails that are around today."

Of course, this doesn't solve the question of whether bilateral symmetry is constrained or not.  My guess is that if it turns out to be, it will be because mirror-symmetry is easier to produce genetically.  A lot of the homeotic genes (genes that guide the development of overall body plan) work by creating a gradient of some protein or another, so the polarity of structures is established (head here, butt there, and so forth).  It might simply be easier to establish a one-way gradient, with a high on one end and a low on the other, than one with multiple highs and lows arranged symmetrically.

Although we do manage to do a five-point gradient in the development of our fingers and toes, so it's doable, it just may not be common.

In any case, here we have a creature that may be the reason we're arranged bilaterally, whether or not it gives us any sort of advantage.  Kind of humbling that we might come from a millimeter-wide burrowing scavenger.  I guess that's okay, though, if it'll keep humanity from getting any more uppity than it already is.