Along came a spider...

Sometimes there's a discovery that's just so cool that I need to tell y'all about it.  It's not apropos of much except that you never know what science is going to uncover next.

Have you ever wondered why some animals' eyes glow in the dark, and others don't?  I've seen raccoons, cats, and (given where I live, lots of) deer get caught in my car headlights at night, and been fascinated by the eerie reflections from their eyes.

But not all animals do this.  You can shine a bright light into a squirrel's eyes all you want, and you'll never see anything but a pissed-off squirrel.

The reason is a fascinating structure you only find in nocturnal animals called the tapetum lucidum.  This is basically a mirror behind the retina.  When light enters the eye and focuses on the retina, some of it passes through that tissue-thin layer of cells without activating one of the light-sensing structures -- i.e., it gets absorbed without contributing to vision.  If you're a diurnal animal (like us) this is no big deal; most of the time we have light to spare, and in fact a more common problem is too much light, which is why we have a sensitive iris that acts like the shutter on an old-fashioned camera, reducing the aperture so the inside of the eye doesn't get fried.

But nocturnal animals need every photon they can get, so many of them have evolved a tapetum.  Some of the light hitting the retina passes through and gets "wasted" -- but then it hits the tapetum and reflects back through the retina, providing a second opportunity to detect it.  This gives animals with this structure much better dim-light vision -- and makes their eyes glow in headlights.

I got to see another, more surprising, animal with a tapetum when I was on a night hike in Belize some years ago looking for nocturnal birds (many of which also have tapeta, for what it's worth).  We were all wearing headlamps, and the guide pointed out that on the trail there were what looked like hundreds of tiny rubies, emeralds, and sapphires, glittering as the beam of the lamps passed across.

"What do you think those are?" she asked, and her eyes were also glittering -- with mischief.

I knelt down and peered at the little jewel-like sparkles, and very quickly discovered they were...

"Each species glows a different color," she said.  "We're not really sure why."

Fortunately, I'm not an arachnophobe, but I did stand up rather quickly.

So that brings us to the discovery, which appeared last week in the Journal of Systematic Paleontology.  Spider fossils aren't very common, given that they are small and don't have bones or teeth (the most commonly preserved parts), and most spider fossils known have come from amber.  So it was quite a surprise to find a beautifully-preserved fossilized spider in Korea in a formation of chert.  Chert is a sedimentary rock (obviously, since that's pretty much where you find fossils) made up of tiny crystals of quartz.  Most of it comes from the layers of the evocatively-named siliceous ooze that coats the deep ocean floor and is made mostly of the silica skeletons of diatoms, microscopic algae that build shells out of glass.  But some chert forms when water passes through cracks in silica-rich rocks, dissolving bits of it that are then deposited in layers somewhere else.  (This is, essentially, the process that forms petrified wood.)

Here, it preserved this little spider so well that after 110 million years, you can still see its tapetum -- meaning it was a nocturnal hunter, rather like a modern wolf spider.

Without further ado, here he is: 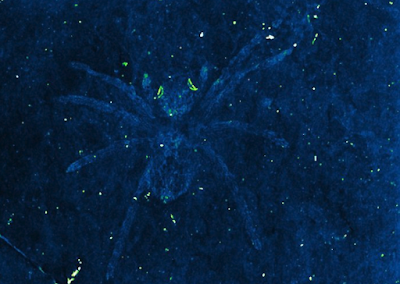 ... and the tapeta still reflect light.

"This is an extinct family of spiders that were clearly very common in the Cretaceous and were occupying niches now occupied by jumping spiders that didn’t evolve until later," said Paul Selden of the University of Kansas, who co-authored the paper, in a press release.  "But these spiders were doing things differently.  Their eye structure is different from jumping spiders.  It’s nice to have exceptionally well-preserved features of internal anatomy like eye structure.  It’s really not often you get something like that preserved in a fossil."

So pretty amazing stuff, and my apologies to the arachnophobes in the studio audience.  Hopefully the title of the post was enough to forewarn you.  Me, I think they're cool, although I wasn't as sanguine as my guide in Belize was about getting nose-to- ... um... nose-to-chelicerae with them.  But this illustrates something I've mentioned many times before; science never loses its capacity to astonish us with the complexity and beauty of the natural world.