Analysis of a last meal

Given how everything kind of sucks at the moment, I suppose I'm to be forgiven for escaping 110 million years into the past to look at a dinosaur's last dinner.

The dinosaur was a nodosaur, of the species Borealopelta markmitchelli.  Not one of your more familiar dinosaurs, but pretty impressive nonetheless; something on the order of three meters long, it looked a bit like an armored tank with a face. 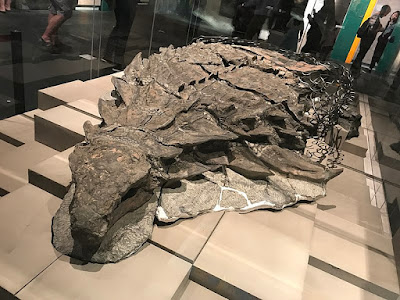 So far, just another dinosaur fossil, albeit a pretty cool one.  But this one, found in northern Alberta a couple of years ago, has a difference that was the subject of a paper this week in the journal Royal Society of Open Science: it is preserved so well that its last meal can be analyzed down to the cellular level.

In "Dietary Palaeoecology of an Early Cretaceous Armoured Dinosaur (Ornithischia; Nodosauridae) Based on Floral Analysis of Stomach Contents," by a team led by Caleb Brown of the Royal Tyrrell Museum of Palaeontology, in Drumheller, Alberta, we find out that the state of preservation of this dinosaur is so intricate that we not only know what it liked to eat, but that it was feeding in an area that had been hit recently by a wildfire, and died in early summer.

"When people see this stunning fossil and are told that we know what its last meal was because its stomach was so well preserved inside the skeleton, it will almost bring the beast back to life for them, providing a glimpse of how the animal actually carried out its daily activities, where it lived, and what its preferred food was," said Jim Basinger, geologist at the University of Saskatchewan and co-author of the paper, in an interview with CNN.

"We could see the different layers of cells in a leaf fragment including the epidermis with the pores, called stomata, through which plants take in carbon dioxide," added study co-author David Greenwood, of Brandon University.  "We could also see the surface patterning of the epidermis cells, which was like a jigsaw pattern that we see on many living ferns."

The degree of preservation allowed for microscopic analysis, and identification of what it had eaten down to the particular species it preferred.

"The lack of horsetails, and rarity of cycads and conifers is surprising, given that these are very common in the surrounding flora," said study lead author Caleb Brown.  "Even within ferns, it looks like Borealopelta may have had a preference for certain types of ferns, while ignoring others."

Two other things -- the growth pattern in the plant material in its stomach, and the presence of charcoal, gave researchers two more pieces of information -- that the dinosaur's death occurred in early summer, and that it was feeding in an area that had been recently burned over.

"When you think about it, this may actually make a lot of sense," Brown said. "If you are a nodosaur, you can only feed close to the ground.  This new growth will also be more palatable and has a higher nutrient content than established growth [like conifers].  As a result, many large mammal herbivores we are familiar with today will seek out recently burned areas in both grasslands and forests, as they provide unique feeding opportunities."

"The discovery of charcoal together with a fern-filled stomach opens a window into the biology of this large herbivorous armoured dinosaur as it suggested Borealopelta was likely a keystone herbivore that shaped the landscape by its grazing, and that it also grazed on the ferns growing in open areas created by wildfires," Greenwood added.  "That is so cool."

What's uncertain is what killed the poor guy.  His body was buried under silt in an aquatic environment, and was mineralized (along with the contents of his stomach) so slowly and gently that it preserved detail down to the cellular level.  Then the rock formation in which he was encased moved along with the continent, sliding northward until what had been a lush, tropical environment, filled with ferns, was positioned in northern Alberta, only to be found by some scientists 110 million years later.

Which, unfortunately, brings us back to the present.  I guess that was inevitable.  And I guess I should be thankful that whatever 2020 has brought, at least it hasn't left me buried in layers of silt, waiting to be uncovered by future paleontologists, who will conclude that mostly what I lived on is toast with raspberry preserves.