Coming hard on the heels of yesterday's post about a woman who claims to be descended from Joseph of Arimathea, today we have some actual valid research, using mtDNA from two-millennium-old teeth in Syria to show that Mesopotamia deserves its moniker "the Cradle of Civilization" -- that same mtDNA signature shows up today as far away as Tibet.

Mitochondrial (mt) DNA is unique in that it always inherits through the matrilineal ancestry.  In other words, you contain the same mtDNA as your mother's mother's mother's etc., as far back as you like to go.  This takes out the role of recombination in your genetic makeup -- the random scrambling of the chromosomes in the nucleus every time they're passed on makes it damn near impossible that the same two parents could produce two genetically identical (non-twin) children.  But with mtDNA, the only differences occur from mutations, which are infrequent -- so this allows us to determine the relationships between different human populations, and track their movements back into prehistory.

My earliest-known matrilineal ancestor, Marie-Renée Brault (born in France in around 1616) had the mtDNA haplotype H13a1a, places her origin in western Europe (which we already knew), and the "H clade" to which she belongs is the commonest mtDNA in Europe.  So no big surprises there. 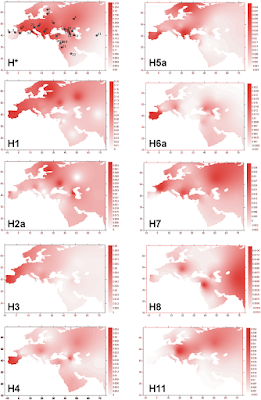 Likewise, my two known Native American ancestors, both from the Abenaki tribe of Nova Scotia, were proven as such by their matrilineal descendants having a characteristic "A clade" mtDNA signature, which clearly demonstrates their ethnic heritage -- and their ultimate connection to other A-clade members in Siberia, Korea, and Japan.

The research that got me started on all this is not new, but was new to me; I was sent a link by a friend and loyal reader of Skeptophilia to a paper in PLOS-ONE called, "mtDNA from the Early Bronze Age to the Roman Period Suggests a Genetic Link between the Indian Subcontinent and Mesopotamian Cradle of Civilization," by Henryk W. Witas, Krystyna Jędrychowska-Dańska, and Tomasz Płoszaj (of the University of Łódź), Jacek Tomczyk (of Cardinal Stefan Wyszyński University), and Gyaneshwer Chaubey (of the Biocenter of Estonia).  And in this paper, we find out that an mtDNA type -- haplogroup M4 and M6, which currently are found only in India -- apparently are older than anyone realized, and came from what is now Syria:


Ancient DNA methodology was applied to analyse sequences extracted from freshly unearthed remains (teeth) of 4 individuals deeply deposited in slightly alkaline soil of the Tell Ashara (ancient Terqa) and Tell Masaikh (ancient Kar-Assurnasirpal) Syrian archaeological sites, both in the middle Euphrates valley.  Dated to the period between 2.5 Kyrs BC and 0.5 Kyrs AD the studied individuals carried mtDNA haplotypes corresponding to the M4b1, M49 and/or M61 haplogroups, which are believed to have arisen in the area of the Indian subcontinent during the Upper Paleolithic and are absent in people living today in Syria.  However, they are present in people inhabiting today’s Tibet, Himalayas, India and Pakistan.  We anticipate that the analysed remains from Mesopotamia belonged to people with genetic affinity to the Indian subcontinent since the distribution of identified ancient haplotypes indicates solid link with populations from the region of South Asia-Tibet (Trans-Himalaya).

The amazing part of this isn't so much in the details, but the method.  Mitochondrial DNA extraction from fossilized teeth can give us information about the movement of people back into prehistory. These ancestors of ours, about whom we know virtually nothing -- not their names, their faces, their professions, their cultures -- tell us about their travels by the genetic information carried in their bodies.

Which I find absolutely fascinating.  It's kind of mind-boggling that I carry a bit of DNA in my cells (lots of bits of it, in fact) that originated in the Middle East twenty-thousand-odd years ago, was carried from mother to daughter as these people moved into eastern Europe, crossing the Alps into France, and thence across the Atlantic Ocean to Nova Scotia for over a hundred years -- then back to France after they lost the French and Indian War and got kicked out -- and finally crossed the Atlantic again in 1785 to settle in southeastern Louisiana.

And each of you carry in your own cells pieces of DNA that have equally long, convoluted, and unexpected histories.

Makes you realize that we're all connected, down to the very instructions that built us, and are far more alike than we are different.