I had a bit of an epiphany this morning.

It was when I was reading an article in the news about the fact that Joe Biden has lost support among law enforcement unions because of his call to increase oversight and investigate claims of unwarranted or excessive violence by the police.  "For Joe Biden, police are shaking their heads because he used to be a stand-up guy who backed law enforcement," said Bill Johnson, executive director of the National Association of Police Organizations. "But it seems in his old age, for whatever reason, he’s writing a sad final chapter when it comes to supporting law enforcement." 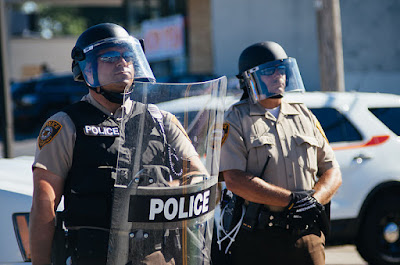 I suddenly realized that this was the common thread running through a lot of the problems we've faced as a society, and that it boils down to people believing that tribal identity is more important than ethical behavior.  The police are hardly the only ones to fall prey to this.  It's at the heart of the multiple pedophilia scandals that have plagued the Catholic Church, for example.  This one resonates for me because I saw it happen -- as I've written about before, I knew personally the first priest prosecuted for sexual abuse of children, Father Gilbert Gauthé.  Father Gauthé was the assistant pastor for a time at Sacred Heart Catholic Church in Broussard, Louisiana; the priest, Father John Kemps, employed my grandmother as live-in housekeeper and cook.  The point here is that when the scandal became public, and it was revealed that Gauthé had abused hundreds of boys, the most shocking fact of all was that the bishop of the Diocese of Lafayette, Maurice Schexnayder, knew about it all along -- and instead of putting a stop to it, he transferred Gauthé from one church to another in the hopes that no one would ever find out that a priest could do such a thing.

For Schexnayder, membership in the tribe was more important than protecting the safety of children.

It happens all the time.  Inculcated very young, and reinforced by slogans like "everyone hates a rat" and "snitches get stitches," kids learn that refusing to identify rule-breakers is not only safer, it's considered a virtue.  Things like cheating rings survive in schools not only from the fact that participation is rewarded by higher grades (provided you don't get caught), but from the complicity of non-participants who know very well what's going on and refuse to say anything.

The teachers themselves are not immune.  In 2011, a scandal rocked Atlanta schools when it was revealed that teachers were changing scores on standardized exams -- 178 teachers and administrators eventually confessed to the practice, and lost their licenses -- and it had been going on for over a decade.  I'm not going to go into the ridiculous reliance of state education departments on high-stakes standardized test scores that probably acted as the impetus for this practice; regular readers of Skeptophilia know all too well my opinion about standardized exams.  What interests me more is that there is no way that 178 teachers and administrators were doing this for a decade, and no one else knew.

The great likelihood is that almost everyone knew, but for ten years, no one said anything.

The truth is that any time people's affiliation becomes more important than their ethics, things are set up for this kind of systemic rot.  How many times have you heard the charge leveled against both of the major political parties in the United States that "you only care about someone breaking the law if (s)he's a member of the other party?"  When the voters -- when anyone, really -- puts more importance on whether a person has an (R) or a (D) after their name than whether they're ethical, honest, moral, or fair, it's only a matter of time before the worst people either side has to offer end up in charge.

We have to be willing to rise above our tribe.  Sure, it's risky.  Yes, it can be painful to realize that someone who belongs to your profession, religion, or political party isn't the pillar of society you thought they were.  But this is the only way to keep a check on some of the worst impulses humans have.  Because when people feel invulnerable -- when they know that no matter what they do, their brothers and sisters in the tribe will remain silent out of loyalty -- there are no brakes on behavior.

So to return to what began this: of course there are good cops.  I have several friends in law enforcement who are some of the kindest, most upstanding people I know.  But it's imperative that the good ones speak up against the ones who are committing some of the atrocities we've all seen on video in the last few days -- peaceful protestors exercising their constitutionally-guaranteed right to assembly being gassed, reporters being beaten and shot in the head with rubber bullets, police destroying a city-approved medics' table in Asheville, North Carolina, and in one particularly horrifying example, cops shooting a tear gas canister into the open window of a car stopped at a stoplight, and when the driver got out yelling that his pregnant wife was in the car, the cops opened fire on him.

If people know they can act with impunity, they will.  It's only when the members of the tribe are willing to call its members out on their transgressions -- when we are as loud in condemning illegal or immoral behavior in members of our own political party, religion, or profession as we are in condemning those of the others -- that this sort of behavior will stop.

And that applies to the police spokespersons who are questioning their support of Joe Biden because he called for more oversight.  No one likes outside agencies monitoring their behavior.  I get that.  But until the police are more consistent about calling out their fellow officers who are guilty of unwarranted or excessive violence, there really is no other choice.