Every civilization is built on the remains of prior ones, something that I recall finding a little startling when I first read C. W. Ceram's wonderful Gods, Graves, and Scholars when I was in tenth grade.  Being fascinated with Greek mythology, I had read the stories of the Iliad and the Odyssey, so I was familiar with Troy -- and shocked to find out that the excavated ruins of Troy span nine levels, bottom to top, and the seventh ("Troy VII"), dating to the 13th century B.C.E., is thought to have been the Troy of Homer.  But the city itself rebuilt itself at least nine times, with previous iterations being abandoned for one reason or another (at least two seem to have been destroyed by earthquakes, and Troy VII shows the expected signs of having been burned and demolished by battle).

This is a well-studied example, but really, everywhere is like that.  We all stand on the ruins of the civilizations that occupied these lands before us, and future civilizations will rise from the ruins of ours.  If you want good evidence of this, check out these two papers that came out last week -- showing that traces of occupation by the Romans are still detectable underground, after the passage of two millennia.

First, in the journal Britannia, we have a paper by Toby Driver, Barry Burnham, and Jeffrey Davies which studied a pattern of dead grass during a drought in 2018 in Wales, and found that the dieback revealed patterns that conformed to Roman roads, plazas, and building foundations.  The compression of the soil from the construction made it more prone to drying out, and as the grass there died, aerial surveys showed what looked like a map of ancient Roman settlements. 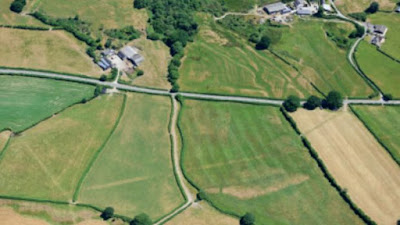 It looks like Wales is heading into another exceptionally dry summer, and the archaeologists are a lot more excited about this than the farmers are.  "There are still huge gaps," said study lead author Toby Driver in an interview with the BBC.  "We're still missing a Roman fort at Bangor, we've got the roads, we've got the milestones – but no Roman fort.  We're still missing a Roman fort near St Asaph, and near Lampeter in west Wales we should have one as well."

Next, we have a paper in the journal Antiquity by Cambridge University archaeologists Lieven Verdonck, Alessandro Launaro, Frank Vermeulen, and Martin Millett, describing the use of ground-penetrating radar to produce a detailed map of a city that was abandoned by the Romans 1,300 years ago.

The city was named Falerii Novi, and is first attested in historical records in 241 B.C.E.  It sits fifty kilometers north of Rome, and was occupied continuously during the Republic and Empire periods, and well into the "Dark Ages" -- the site was last inhabited in about 700 C.E., although the exact date (and reason) it was abandoned isn't known.

But gradually the ruins were covered up by vegetation and eventually all visible traces were gone.  But the remains were still there, underground.

And now Verdonck's team has used radar to see where they lie, generating 28 billion data points and a map of the city of astonishing detail. 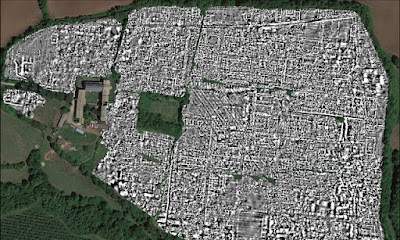 What's most amazing about this is that the researchers created this map without disturbing the site at all.  As study senior author Martin Millett said, in an interview with Gizmodo, it's taken two hundred years to excavate Pompeii to a similar degree of detail, and -- despite the care that was taken -- in that more famous site, the process of uncovering the ruins undoubtedly damaged some of the structures underneath.

Here, we have a picture, and a quantity of data that will take years to analyze, without moving one speck of dirt.

These papers make me wonder what might lie beneath the soil on which I walk.  Where I live has been occupied (rather sparsely) by people of European descent for only two hundred years or so, but for thousands of years before that by indigenous people of the Cayuga and Seneca Nations.  What traces of those people are under my feet right now?  We all stand on the shoulders of our predecessors, and even if they're not as celebrated in literature as Homeric Troy and Imperial Rome, they're still there beneath our own dwellings, businesses, and roads, just as ours will lie beneath the ones that will be built by our far-distant descendants.