Because I have an endless fascination for things that are big and powerful and can kill you, today's topic is: Deinosuchus.

If you know a little Greek, the name itself should put you on notice.  It comes from the words δεινός (terror) and σοῦχος (crocodile).  Because crocodiles aren't terrifying enough on their own, apparently.  The largest extant crocodilian is the Australian saltwater crocodile, which can get to be about six meters in length and can weigh twelve hundred kilograms.  It regularly attacks humans, often stupid ones who don't know enough to stay away from the shallow water habitats it prefers, and as the Wikipedia article puts it, "As a result of its power, intimidating size and speed, survival of a direct predatory attack is unlikely if the crocodile is able to make direct contact."

Deinosuchus was just shy of twice as long.  Considering that the usual rule that the mass of an animal varies as the cube of its length, this would put the biggest ones at eight times heavier than a saltie -- something on the order of nine thousand kilograms.

That's equivalent to the mass of a school bus.  Just for reference.

If that's not bad enough, it had teeth up to a foot long.  Lots of them.  The largest species, Deinosuchus riograndensis, which lived (unsurprisingly) in what is now the western United States and northern Mexico, apparently fed on dinosaurs. 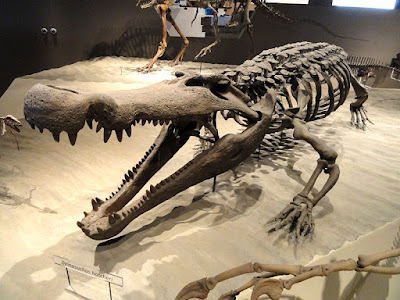 A reconstructed Deinosuchus hatcheri skeleton in the Natural History Museum of Utah.  [Image is in the Public Domain]

According to research published last week in The Journal of Vertebrate Paleontology -- which is why this whole horrifying topic comes up -- a combination of new fossil finds and re-analysis of old fossils, Deinosuchus was probably an ambush predator, like its much smaller modern Australian cousin.  It could, paleontologists believe, have taken down just about any of the dinosaurs alive at the time, up to the biggest ones.

"Deinosuchus was a giant that must have terrorized dinosaurs that came to the water's edge to drink," Adam Cossette, of the New York Institute of Technology College of Osteopathic Medicine at Arkansas State University.  "Until now, the complete animal was unknown.  These new specimens we've examined reveal a bizarre, monstrous predator with teeth the size of bananas."

During the time it was around -- the late Cretaceous Period, between 75 and 82 million years ago -- it lived in similar habitats to the Australian saltwater crocodile.  At that time, North America was split in two by a shallow sea that extended from the Arctic Ocean to what is now the Gulf of Mexico, and which covered most of what is now the Midwest and Southeast.  The Western Interior Seaway, as it was called, separated the small continent of Laramidia (now the Southwest, California, and the Pacific Northwest) from Appalachia (the mid-Atlantic, Northeast, and eastern Canada).  (If you're curious, the surreal, brightly-colored rock formations in what is now Bryce Canyon National Park, in Utah, were deposited at this time.  Hard to imagine that what is now high desert was once a shallow tropical sea, but it was.)

So Deinosuchus would have lived on both sides of that narrow sea, laying in wait for any prey to come along.  Also found in these same rocks are fossils of Pteranodon, the familiar crested pterodactyloid, along with hadrosaurs (duck-billed dinosaurs) and monstrous turtles like Archelon, which is estimated at five meters in length and weighing about two thousand kilograms.

Hard to picture that tableau as having occurred in what is now Kansas.

One of the weirder things about Deinosuchus is that it didn't make it to the Cretaceous Extinction.  It died out about 75 million years ago, missing getting fried by the Chicxulub Meteorite strike by a good nine million years.  What wiped it out is unknown, but there's a general pattern that if the environment changes, apex predators get hit the hardest -- they're usually slow-reproducing, and their survival depends on the entire biotic web being intact.  (Consider that most of the modern large mammalian predators are on the Endangered Species List.)

There comes a point where superlatives fail me, and I think I've hit it.  I'll leave the rest to your imagination.  Suffice it to say that while it was around, it was the unchallenged ruler of the Western Interior Seaway.  And honestly, cool as it undoubtedly was, I'm just as glad those aren't lurking around any more.  Australian saltwater crocodiles are terrifying enough.