When I'm proven wrong, I usually (1) feel extremely embarrassed about it, and (2) retreat in disarray.  Oh, and (3) do everything I can to make sure I don't make the same error the next time.  I mean, everyone makes mistakes, so I probably shouldn't overreact to it the way I do; but I like to think that as a writer on science and skepticism, I'm conscientious enough to check my facts and sources.  Otherwise, I'm really no better than the people I rail against on a daily basis.

As an especially good example of this, remember Dr. Charlene Werner?  She was the star of a viral YouTube video a few years back called "Crazy Homeopathy Lady," the title of which you'd think would be devastating enough.  In this video, she attempts to explain homeopathy thusly:

If you've never seen this video, I highly recommend it.  I can say from experience that it's even more fun to watch while drunk, although I won't be held responsible if you laugh so hard you fall out of your chair and spill scotch all over your carpet. 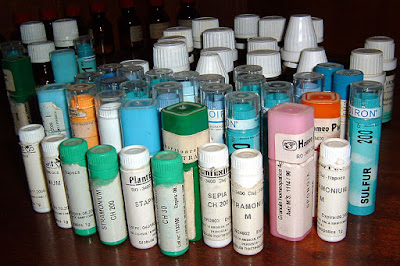 So anyhow.  This video has received millions of views, and tens of thousands of comments, most of which were of the "Holy shit, this woman is insane" variety.  So you'd think that any normal human being who got this kind of feedback would sort of vanish from the public eye.  Most of us, in fact, would probably want to crawl under a rock.


Imagine your vision system has qualities similar to a computer.  The photoreceptors are like your keys on your keyboard.  There are approximately 1.2 million of them in each eye.  When clicked or activated with light, the data from your 'visual keyboard' relays to your brain.  Your brain has characteristics similar to a hard drive with an operating system that runs all the 'software programs' or functions in your body, such as moving your eye muscles, tracking, focusing, and visual memory.  Even your heart, kidney, lungs, and all your bodily functions depend on accurate key strokes from your photoreceptors and other sensory input, access to your brain (hard drive), a powerful operating system, and efficient use of software programs.


Homeopathy then scans your system to eliminate 'viruses' or 'malware', which are often belief systems or programmed patterns that interrupt your system's smooth functioning.

So a bottle of water with no active ingredients is the medical equivalent of Norton AntiVirus?  If only we'd realized sooner that these "remedies" can fix faulty belief systems, we might have avoided having our government turned into Corruption "R" Us by a man whose chief claim to fame seems to be embodying all Seven Deadly Sins in one individual.


When we consider the whole of man we can even make a further leap……that mass in the universe by definition is matter, matter is substance, the substance of man is cells, and cells can be broken down into compounds, compounds into elements, and elements into tiny particles of energy called electrons, protons, neutrons, and sub-atomic particles held together by an “invisible” force such that what may look like a physical body is merely energy.

None of which, of course, is going to change a thing.  If the reception her bizarre YouTube video received didn't make her reconsider her position, nothing will.  Unfortunately, there are still people who buy what she's selling (literally and figuratively), although it's to be hoped that the support for such completely disproven modalities as homeopathy is waning.

The chance of convincing Dr. Werner, however, is "infant-esimal."