Scooting past the reviewers

If there's one piece of advice I have for anyone trying to stay informed, it is: check your sources.

Unfortunately, these days, that takes more than just a quick look, or a recommendation from someone with authority.  After all, just two days ago Donald Trump tweeted that Fox News wasn't right-wing enough for him, that all of his faithful MAGA followers should troop on over to OANN (One America News Network),  that it was the only news source that was "fair and balanced."  Of course, this was transparent enough; in Trump-speak, "fair and balanced" means "willing to kiss Trump's ass on a daily basis."  OANN is a far-right outlet allied to sites like Breitbart -- and let's face it, anything to the right of Fox News isn't even within hailing distance of unbiased.

So "sounds like a reliable source" is itself unreliable.  As an example, take the paper that appeared last week, authored by Mathieu Edouard Rebeaud (University of Lausanne), Valentin Ruggeri (University of Grenoble), Michaël Rochoy (University of Lille). and Florian Cova (University of Geneva).  I won't tell you the title, but leap right in with an excerpt:

Use and promotion of push-scooters have been advocated on the basis that they would contribute to the reduction and slowing of global warming.  In fact, the French scientific elite has been working on the subject and has recently argued that there was no proof of global warming, as he could not see the ice cap melt on his computer [3].  So, even if global warming was real, there are serious reasons to think that France is not affected, as global warming clearly stopped at the closed border [4].  Unfortunately, the debate is being polluted by bots, trolls and so-called experts funded by Big Trottinette to spread misinformation. Indeed, an independent study (in press on the third author’s Google Drive®) found a positive correlation between experts’ positive advocacy of push-scooters and the amount of money they received from Decathlon® (r = 3.14).  The fact that push-scooters are now a ‘generic’ means of locomotion that can be produced by anyone for a cheap price might lead people to the conclusion that no private interest is involved, but we’re not fooled, we know the truth [5].  So, it is important to diminish the increasing number of push-scooter drivers who are sacrificed on a daily basis.

The authors then go on to show that the way to combat the deadly push-scooter accident surge is through doses of hydroxychloroquine, which also shows promise in dealing with the Israeli-Palestinian conflict.  (Well, most of their research supported this.  They didn't have so much luck with Study 2.  "Study 2 was excluded from analysis and from this paper," the authors write, "as it did not provide informative results (i.e. the results we wanted)." 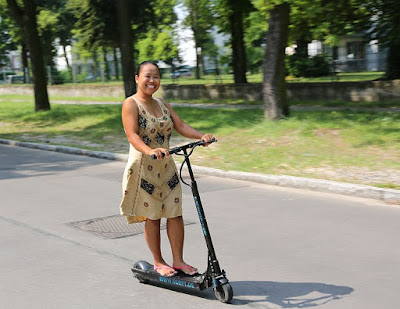 Also notable is that besides the four actual authors, there are also additional co-authors listed as belonging to places like "The Institute of Quick and Dirty Science of Neuneuchâtel, Switzerland" and the "Institute of Chiropteran Studies of East Timor," and one is called a "General Practitioner and Independent Seeker of Science" from Ankh-Morpork, France.

You may be thinking that this must have appeared in some kind of science spoof site like the brilliant Journal of Irreproducible Results.

You may be wrong.

This paper, titled, "SARS-CoV-2 Was Unexpectedly Deadlier than Push-scooters: Could Hydroxychloroquine be the Unique Solution?", was published in the Asian Journal of Medicine and Health.

(If you want to read it -- which I highly recommend -- you should do it soon.  My guess is that it'll be taken down before long.)

Sounds like a legitimate source, doesn't it?  You might be clued in that something was wrong if you noticed that the paper was submitted on July 24, accepted on August 11, and published on August 15 -- I say that notwithstanding the obviously goofy content from the title on, because most of the papers in the AJMH aren't blatantly off.  But if you look at stuff like this -- dates that make it clear that there was zero peer review involved -- there's no doubt left that this is one of those predatory pay-to-play journals, that will publish damn near anything if you give 'em some money.

Which, of course, was the point of the Rebeaud et al. paper.  It wasn't just to give us all a good laugh -- although it did that as well -- it was to shed some light on the way that predatory journals muddy the waters for everyone.

So back to where we started: CHECK.  YOUR.  SOURCES.  Which doesn't just mean a cursory "okay, it's a 'journal of medicine and health,' it must be reliable."  Take five minutes to do a quick search to see if there are any reviews or commentary on the journal itself.  The best thing is to find good sources that you know you can always rely on -- top-flight research journals like Science, Nature, Cell, Proceedings of the National Academy of Science, and PLOS-One, to name five -- as well as research-for-the-layperson journals like Scientific American and Discover.

If you get outside of those realms, though, caveat lector.  You never know what kind of lunacy you'll find, up to and including recommendations for taking hydroxychloroquine to prevent push-scooter accidents.