One of the many things I find fascinating about the evolutionary model is how different lineages can happen on the same "solution" to the problems of surviving and reproducing, leading to similarities cropping up that don't result from common ancestry.  This is a phenomenon called convergent evolution, and explains why the North American flying squirrel and Australian sugar glider look a lot alike, even though they are only distantly related.  (The flying squirrel is a rodent, and the sugar glider a marsupial more closely related to kangaroos.)

I put the word "solution" in quotes and use it with caution, because this makes it sound like evolution is forward-looking, which it is not.  As Richard Dawkins explains brilliantly in his book The Blind Watchmaker, to trigger evolution, all you have to have is an imperfect replicator (in this case, DNA) and a selecting agent.  To phrase it more like Darwin would have put it: variation coupled with differences in survival rate.

I recall how surprised I was to learn that the eye had actually evolved multiple times.  Starting with light-sensitive spots, such as you still find today in many microorganisms, variations on different lineages came up with a variety of different "solutions" -- the pinhole-camera eye of a chambered nautilus, the cup-shaped eye of a flatworm, the compound eye of a fly, and our own eye with a transparent lens like that of a refracting telescope.  All these adaptations work just fine for the animal that has them.  (Eye formation in a number of species is controlled by the paired-box 6 [PAX6] gene, without which eyes won't form at all.  It's such a critical gene that it is conserved across thousands of species -- in fact, your PAX6 gene and a mouse's are identical, base-pair-for-base-pair.)

The reason this subject comes up is because of some research published in the journal Current Biology last week that showed another trait -- flight -- not only evolved separately in groups like insects and birds, but even in the dinosaurian ancestors of today's birds, it evolved more than once.

A team led by paleontologist Rui Pei of the Chinese Academy of Sciences analyzed bone and feather structure of various dinosaur groups to see if they flew, glided, or were using their feathers for a different purpose (such as keeping warm).  To their surprise, it was found that multiple lineages were capable of flying or nearly so.  The authors write:

Here are their results, in graphical form: 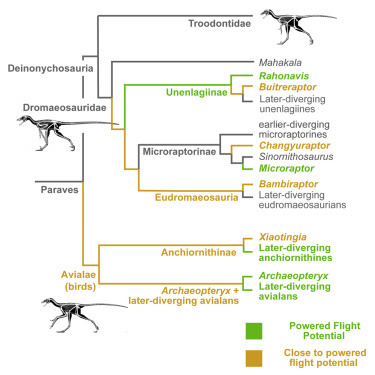 As you can see, actual birds -- labeled "Later-diverging avialans" near the bottom of the tree -- were far from the only ones to have flight capability.  Rahonavis, Microraptor, and several of the anchiornithines were probably fliers, and only the last mentioned is on the same clade as today's birds.

Flying is pretty useful, so it's no wonder that when feathers evolved from scales -- probably, as I mentioned earlier, in the context of warmth and insulation -- it was only a small step remaining toward lengthening those feathers to the point that their owners could catch a breeze and glide.  After that, the same kind of refinement took over that happened with the eye, and eventually, you have true flight.

So that's yet another cool bit of research about prehistory.  Wouldn't you like to know what those prehistoric fliers looked like?  I'd love to see them.  From a distance, because a lot of them were predators.  For example, Microraptor is Greek for "tiny hunter," and were a little like miniature velociraptors with wings.

If you wanted an image to haunt your dreams.