Continuing with the paleontological bent we've been on all week, today we have: bones of a previously-unknown tyrannosaur on a beach in England.

As unlikely as it sounds, beaches in southern England are great places to find dinosaur bones.  One of the founders of the science of paleontology, Mary Anning, did most of her work in the Lyme Regis region of the Dorsetshire coast during the first half of the nineteenth century, and her discovery of complete skeletons of Jurassic-era ichthyosaurs and plesiosaurs on walks with her faithful dog has become the stuff of legends.  (Sadly, her dog was killed in a landslide when a cliffside collapsed -- Anning missed sharing his fate because she was only a couple of feet ahead of him.)

The new find comes from Cretaceous sedimentary rocks on the coast of the Isle of Wight, where paleontologists from the University of Southampton have identified some fossilized bones as belonging to a new species that has been christened Vectaerovenator inopinatus (the name translates roughly to "unexpected air-filled hunter").  It got its name from the presence of air sacs in and around the bones.  This adaptation is also found in modern birds, re-emphasizing the relationship between predatory theropods and chickadees.

Vectaerovenator was a big guy -- an estimated four meters long -- but was astonishingly light-built.  "We were struck by just how hollow this animal was - it's riddled with air spaces," said Christopher Barker, who was lead author of the study.  "Parts of its skeleton must have been rather delicate.  The record of theropod dinosaurs from the 'mid' Cretaceous Period in Europe isn't that great, so it's been really exciting to be able to increase our understanding of the diversity of dinosaur species from this time...  You don't usually find dinosaurs in the deposits at Shanklin as they were laid down in a marine habitat.  You're much more likely to find fossil oysters or driftwood, so this is a rare find indeed."

The fossils were found in marine sedimentary rocks, and surmise is that the dinosaur they belonged to fell into a river (whether before or after it died is, of course, impossible to tell) and its body washed out into the shallow sea, where it was covered up and preserved. 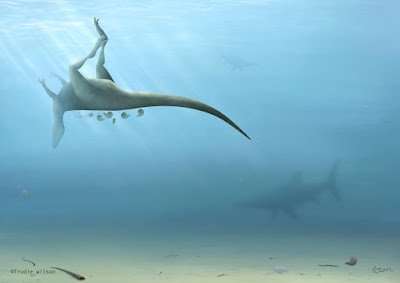 The bones were found by three amateur fossil-hunters.  Robin Ward of Stratford-upon-Avon, was walking on the beach with his family and found the first ones.  "The joy of finding the bones we discovered was absolutely fantastic," Ward said.  "I thought they were special and so took them along when we visited Dinosaur Isle Museum.  They immediately knew these were something rare and asked if we could donate them to the museum to be fully researched."

"It looked different from marine reptile vertebrae I have come across in the past," said James Lockyer, of Spalding, Lincolnshire, who found additional pieces of the skeleton.  "I was searching a spot at Shanklin and had been told and read that I wouldn't find much there.  However, I always make sure I search the areas others do not, and on this occasion it paid off."

Paul Farrell, an Isle of Wight native, contributed further pieces to the discovery.  "I was walking along the beach, kicking stones and came across what looked like a bone from a dinosaur," Farrell said.  "I was really shocked to find out it could be a new species."

All three agreed to donate their finds to the Dinosaur Isle Museum at Sandown.

What this highlights to me is the degree to which interested amateurs can contribute to science.  In fact, Mary Anning herself had no training in paleontology, or in fact, in any kind of science; to call opportunities for women in science in the early nineteenth century "limited" is a vast understatement.  Anning's descriptions of her extraordinary discoveries were turned down for publication by the Magazine of Natural History, and she was denied entry to the Geological Society of London purely because of her gender.

So it's a double-edged sword, isn't it?  Talented amateurs can make incredible contributions, but only if the often hidebound powers-that-be will allow them.  Sometimes it's an uphill struggle just to gain a small amount of credibility, and in Anning's case, even that never happened.  Shortly before her death from breast cancer at the age of 47, she wrote, "The world has used me so unkindly, I fear it has made me suspicious of everyone."

Fortunately, that isn't the case here, and the amateurs and the scientists are happily collaborating.  With luck and persistence, we will continue to learn about the prehistoric landscape of England as it was 115 million years ago, when dinosaurs like Ventaerovenator were prowling the shores.