If you were going to try to pick out the all-time stupidest practice from the alt-med crowd, you'd have a lot of contenders for the top prize.  You have your homeopathic water.  You have your "quantum downloadable medicines."  You have your health benefits of breathing air that bees have flown around in.  You  have your recommendations to take all your clothes off and expose your butthole to direct sunlight.

None of which, for the record, did I make up.

But I think I've found the odds-on favorite, thanks to a loyal reader of Skeptophilia who alerted me to the practice.  Today we look at:

If you're sitting there thinking, as I was, "Okay, that can't possibly mean what it sounds like," then yes -- it means exactly what it sounds like.  (Actually, what I said was, "You have got to be fucking kidding me.")  Doctors (I'm using the term loosely here) are trying to treat COVID and other illnesses by sticking a plastic tube up your ass and pumping your rectum full of ozone.

I read this entire article with an expression like this on my face: 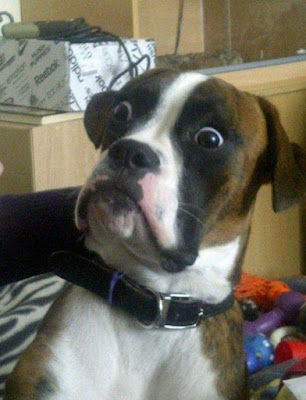 Okay, brief pause to (1) give you time to stop laughing and/or retching, and (2) review a little bit of high school chemistry.

Ozone is O3 (ordinary oxygen is O2).  Elemental oxygen is, unsurprisingly, a strong oxidizer, meaning it is really good at pulling electrons away from other molecules.  In the case of organic molecules, this usually makes them fall apart.  Fire, after all, is just the energy released by rapid oxidation.

Put simply, oxygen is toxic.  We depend on it to "burn" the glucose molecules from which we get our energy, but there's good evidence that the evolution of aerobic respiration started as a detoxification pathway.  When the first photosynthetic organisms evolved (probably cyanobacteria), the oxygen they gave off as a waste product resulted in the oxidation (i.e. death) of most of the living things on Earth, at that point all single-celled microorganisms.  The ones that survived did so because they either were able to (1) avoid the oxygen altogether (these evolved into today's anaerobic bacteria), or (2) detoxify the oxygen by handing it the electrons it wanted, in most circumstances inducing it to bind to hydrogen ions and stabilize as water molecules.  This latter pathway releases a lot of energy, and the ancestors of aerobes -- in other words, most life forms on Earth -- survived because they evolved a way to hook this energy release to powering their own metabolic processes.

So oxygen is dangerous stuff, and we've just learned to live with it.  But where all this is leading is: ozone is a stronger oxidizer than elemental oxygen.  In fact, five times stronger.  It's twice as strong an oxidizer as chlorine gas, which is dissolved into pool water because it's so good at killing pathogenic microorganisms.

This is the stuff they're recommending blowing up your ass.

The "research" that the article linked above cites has the following to say, apropos of using this technique to treat COVID:

The coronavirus envelope is rich in cysteine, and viral activity depends on the conservation of these residues.  Cysteine contains a thiol or sulfhydryl group (–SH); many viruses, including coronaviruses, require these reduced sulfhydryl groups for cell entry and fusion.  Sulfhydryl groups are susceptible to oxidation, and therefore to the oxidizing effect of ozone. Peroxides created by ozone administration oxidize cysteines and show long-term antiviral effects that can further reduce viral load.  Once their capsid is removed, virions cannot survive or replicate, and the creation of dysfunctional viruses due to the action of ozone offers unique therapeutic possibilities.

Well, you could oxidize the virus's capsid by setting it on fire, too, but doing that to the viruses in someone's lungs could present a bit of an issue.

Of course, this was the thing about Donald Trump's much-quoted comments about using ultraviolet light exposure or intravenous bleach to kill coronavirus.  Sure, bleach and ultraviolet light can both destroy the virus, but something that kills the pathogens and simultaneously kills you is a little counterproductive, don't you think?

It's always the problem with showing that anything -- be it an antiviral or any other medication -- that works just fine in vitro will have the same effect, and no deleterious side effects, in vivo.  You not only have to demonstrate that the drug accomplishes what you want it to do, but (1) can efficiently get to the part of the body where it's needed, and (2) doesn't destroy healthy tissue along the way.

Rectal insufflation of ozone kind of fails on both counts, doesn't it?  Okay, it probably kills coronavirus, but they're mostly in your lungs, not your rectum, and it's highly damaging to the rest of you.

Having oxidation damage to the delicate lining of your lower gastrointestinal tract would not be fun.  Having that on top of a COVID-19 infection would be a level of misery I can only imagine.

So there we are.  What is probably the stupidest alt-med therapy I've ever heard of.  Of course, I hesitate even to say that, because the alt-med folks seem to look upon this as some sort of challenge.  Every time I think, "Okay, this is it, it can't get any more idiotic than this," they up and exceed their previous record.

As the quote attributed to Einstein so aptly put it: "The difference between genius and stupidity is that genius has its limits."

***************************************
This week's Skeptophilia book recommendation is brand new, and is as elegiac as it is inspiring -- David Attenborough's A Life on Our Planet: My Witness Statement and a Vision for the Future.
Attenborough is a familiar name, face, and (especially) voice to those of us who love nature documentaries.  Through series such as Our Planet, Life on Earth, and Planet Earth, he has brought into our homes the beauty of nature -- and its desperate fragility.
At 93, Attenborough's A Life on Our Planet is a fitting coda to his lifelong quest to spark wonder in our minds at the beauty that surrounds us, but at the same time wake us up to the perils of what we're doing to it.  His message isn't all doom and gloom; despite it all, he remains hopeful, and firm in his conviction that we can reverse our course and save what's left of the biodiversity of the Earth.  It's a poignant and evocative work -- something everyone who has been inspired by Attenborough for decades should put on their reading list.
[Note: if you purchase this book using the image/link below, part of the proceeds goes to support Skeptophilia!]