Following hard on the heels of yesterday's post about dogs' uncanny ability to tune into their owners' cues, today we have:

Dogs that continue wanting to interact after they're dead.

No, I'm not making this up, but the people making the claim probably are.  According to a couple in Southport, Merseyside, England, their flat is occupied by a ghost dog that likes to sleep in their bed with them.

Mike Lee was asleep with his husband Blake early one morning, when something very odd happened.  "About five in the morning, I thought the cat had come on the bed to wake us up for food, but the cat was nowhere to be seen," Lee said.  "It was like footprints that were coming slowly on the bed, then lay on my foot.  It lays crossways.  You can see [in the photo] where I have a fluffy blanket on the bed; it is completely flat then when this dog comes across you can see the dip in the bed where it is lying.  It is quite heavy, too heavy to be a cat."

So rather than doing what I'd have done, which is wet the bed and then have a stroke, Lee decided to use his phone to see if he could communicate with the spectral pupper.  His phone has an "infrared camera and a two-way microphone," so he said into it, "Is anybody there?" and was met with "a high-pitched howl."

Given that the dog was right there, why he had to use the phone rather than just saying it is anyone's guess.  Maybe ghost dogs only use Verizon, or something.

"It doesn't scare me, you know what it might be and what it couldn't be," Lee said.  "It's not going to harm you.  It is a poltergeist but ghosts don't seem to do any harm anyway.  All it does is just lie on my feet, that's all it does.  I have my partner as a witness who has seen the dip in the bed.  When I asked if the ghost was there the other day, he heard the noise it made.  There's no way a cat would make that noise, it must be a dog."
I'm assuming the noise he's talking about is the disgusting slurping sound dogs make when they are conducting intimate personal hygiene, but he didn't specify. 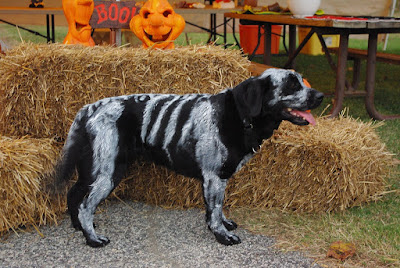 [Image licensed under the Creative Commons Virginia State Parks staff, Ghost Dog (6312596718), CC BY 2.0]
In any case, Lee and his partner seem awfully sanguine about the whole thing.  Our dog already takes up more than his fair share of the bed (when we allow him up there, which is seldom), so I don't think I'd be all that happy about a spirit dog joining us.  After all, what are you going to do if you don't want Ghost Pooch up there?  Grab him by his invisible collar and drag him off?  Offer him a treat to lure him away?  I don't know what kind of treat you could tempt a dead dog with, anyhow.
I have to admit, though, that as canine hauntings go, it could be worse.  A few years ago I did a piece on Ballechin House, in Perthshire, Scotland, that was haunted by an insane ex-military guy and his various dogs.  People visiting there allegedly had experiences like an "overpowering doggy smell" and being nudged by a wet nose, and one person supposedly saw a pair of disembodied dog paws on her nightstand.  Then there's the East Anglian legend of Black Shuck, a giant demonic dog who is capable of "sucking the life out of its hapless victims... leaving them shriveled."
So an invisible dog snoozing on your bed is, in the grand scheme of things, pretty tame.  I still don't need any additional pets, but I guess a ghost dog isn't so bad as long as it behaves itself and doesn't suck out my soul or carelessly leave its paws hanging around on the furniture.  It'd save in pet food costs, for sure.  Oh, and vet visits would be unnecessary, given that the dog has already Joined the Choir Eternal.  Any pet hair it sheds would be invisible anyhow, so cleanup would be less of an issue.
But me, I think I'll stick with live dogs.  At least you always know where they are.  I'm a bit twitchy at the best of times, and having an invisible canine oozing about the place would be kind of unnerving.
**************************************
I've loved Neil de Grasse Tyson's brilliant podcast StarTalk for some time.  Tyson's ability to take complex and abstruse theories from astrophysics and make them accessible to the layperson is legendary, as is his animation and sense of humor.
If you've enjoyed it as well, this week's Skeptophilia book-of-the-week is a must-read.  In Cosmic Queries: StarTalk's Guide to Who We Are, How We Got Here, and Where We're Going, Tyson teams up with science writer James Trefil to consider some of the deepest questions there are -- how life on Earth originated, whether it's likely there's life on other planets, whether any life that's out there might be expected to be intelligent, and what the study of physics tells us about the nature of matter, time, and energy.
Just released three months ago, Cosmic Queries will give you the absolute cutting edge of science -- where the questions stand right now.  In a fast-moving scientific world, where books that are five years old are often out-of-date, this fascinating analysis will catch you up to where the scientists stand today, and give you a vision into where we might be headed.  If you're a science aficionado, you need to read this book.
[Note: if you purchase this book using the image/link below, part of the proceeds goes to support Skeptophilia!]