Analysis of a triple-whammy

I always find it wryly amusing when I hear someone talk about the Strong Anthropic Principle -- the idea that the universe was fine-tuned by a creator to be hospitable to life, particularly human life -- because it doesn't take much of a close look to become aware of exactly how inhospitable the universe actually is.
Even here on Earth, the situation is kind of dicey.  Our planet's history is really one cataclysm after another; that our own particular lineage survived is probably more a matter of luck than anything else.  In fact, only 74,000 years ago, climate havoc caused by the eruption of the Indonesian volcano Toba is thought by some scientists to have nearly wiped out our species -- they estimate the "Toba bottleneck event" to have reduced the entire population of Homo sapiens to under ten thousand individuals.  (For reference, that means that the human population of the whole planet was about as many people as currently live in Sitka, Alaska.)  Besides major volcanic eruptions, add in earthquakes and tsunamis, global marine anoxia events, and meteor strikes, and you can see that where we live isn't nearly as hospitable as it might look at first.
So the truth lies closer to the Weak Anthropic Principle -- of course the universe, and the Earth in particular, have the conditions necessary for life to exist, because if they didn't, we wouldn't be here to consider the question.
The reason all this catastrophic stuff comes up is a paper that came out a couple of weeks ago in Nature Communications Biology.  Entitled, "Widespread Loss of Mammalian Lineage and Dietary Diversity in the Early Oligocene of Afro-Arabia," by Dorien de Vries (of the University of Salford), Steven Heritage (of Stony Brook University), and Matthew Borths, Hesham Sallam, and Erik Seiffert (of the Duke University Museum of Natural History), it looks at a little-known extinction event that was apparently the result of a one-two-three punch that nearly halted the mammalian species in Africa in their tracks.
Which, of course, also includes our own ancestors. 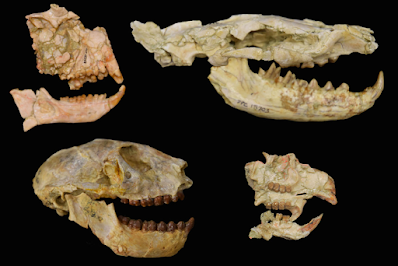 Some of the Eocene animal groups affected by the extinction -- the left two are primates, the upper right a hyaenodont, and the lower right a prehistoric rodent.  [Photo by Matthew Borths]
The researchers had their first clues about the magnitude of the event, which occurred on the order of thirty-three million years ago, from looking at fossilized mammal teeth from East Africa, and found that right on the boundary of the Eocene and Oligocene, the number of mammal species dropped drastically.
"In our anthropoid ancestors, diversity bottoms out to almost nothing around thirty million years ago, leaving them with a single tooth type,” said Erik Seiffert, senior co-author of the paper, in an interview with EurekAlert.  "That ancestral tooth shape determined what was possible in terms of later dietary diversification...  There's an interesting story about the role of that bottleneck in our own early evolutionary history.  We came pretty close to never existing, if our monkey-like ancestors had gone extinct thirty million years ago.  Luckily they didn’t."
What seems to have driven the extinction was a triple-whammy -- rapid cooling of the climate after the equally catastrophic Paleocene-Eocene Thermal Maximum (during which the global average temperature was eight degrees warmer than it is now), followed by the huge Chesapeake Bay meteorite collision and a near-simultaneous massive eruption of flood basalts in Ethiopia.
Diversity plummeted.  More interestingly, the extinction preferentially spared generalists -- mammals which, from their tooth morphology, apparently could eat a variety of different kinds of food.  Specialists got hit the hardest, once again reinforcing the general evolutionary concept that if the ecosystem is stable, specialization is a good thing, but during periods of rapid change, it's the generalists who come out on top.
This -- as Seiffert says, luckily for us -- left our own distant ancestors to continue loping about on the African savanna, and also knocked out a lot of the competition.  The shape and structure of our own teeth reflect that event.  "We lost a lot of diversity at the Eocene-Oligocene boundary," said study co-author Matthew Borths.  "But the species that survived apparently had enough of a toolkit to persist through this fluctuating climate."
This should be yet another cautionary note about the fragility of the Earth's suitability for humanity, not to mention our current heedless messing-about with the planetary climate and ecosystems.  It's unlikely to, of course.  We don't have a very good record of listening to scientists, even when our own survival is at stake.  Part of this is that in recent memory we haven't had to deal with planet-wide natural disasters -- it's made us cocky.
"We've always been fine before," is the general attitude.
All it takes is reading the de Vries et al. paper to realize that "always" is singularly inapt.