A new kind of thagomizer

When I was an undergraduate, I think one of the most startling things I learned was how few prehistoric animals we actually know about.

Like many kids, I grew up with books on dinosaurs and other prehistoric animals, and I was captivated by the panoramic artistic recreations of the Cretaceous landscape, with lumbering triceratops and T. rexes, and pterodactyloids gliding overhead (and always, for some reason, with a smoldering volcano in the background).  It was my evolutionary biology professor who blew all this away.

Fossilization, he said, is ridiculously rare.  It takes a significant series of very unlikely events to result in a fossil at all, much less one that could last 66-plus million years.  The deceased organism has to land in, or be covered by, sediments; it can't be eaten up or otherwise destroyed by animals.  The sediments it's encased in have to be undisturbed long enough to harden into rock, then that rock has to avoid erosion and the other geological processes that eventually degrade most of the rocks the Earth produces.

Then, that surviving fossil-bearing rock has to be found by scientists.

So we're basing our picture of prehistoric landscapes upon a random sampling of a very small number of species.  It is, my professor said, like someone tried to put together a picture of the modern landscape using only the remains of a mouse, a maple tree, a deer, a sparrow, a bullfrog, and a great white shark.

The situation may not be quite that bleak, but it's not far off.  For every one pre-Cretaceous-extinction organism we know about, there are likely to be ninety-nine we have no record of.  Which is why even after a couple of hundred years of serious fossil-chasing, we still have surprises awaiting.

Take, for example, the discovery of a fossil in Chile that was so weird that for a while, paleontologists had reconstructed it as an entirely different animal.  It was a tail that had sharp plates on either side -- clearly some kind of defensive weapon.  The plates put the researchers in mind of the stegosaurus: 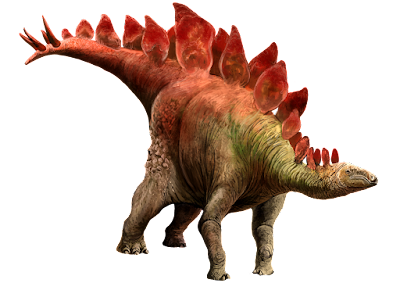 Well, when the paleontologists looked at the new fossil, they realized that the thagomizer on this puppy was in a class by itself.  This thing could have chopped a T. rex off at the knees.  But further analysis of the rest of the skeleton showed that it wasn't a stegosaurus relative at all; it was a type of ankylosaur, a group of tank-like dinosaurs, most of which had tails ending in clubs (formidable enough weapons in and of themselves).

"It's a really unusual weapon," said Alex Vargas, of the University of Chile, who co-authored the paper on the find this week in Nature.  "Books on prehistoric animals for kids need to update and put this weird tail in there. ... It just looks crazy."
The new species was christened Stegouros elengassen.  Here's an artist's reconstruction: 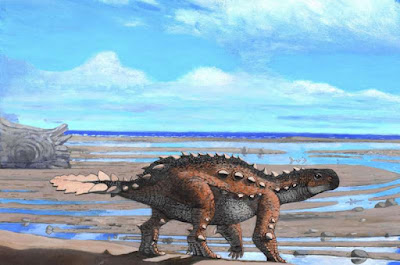 [Illustration by Luis Perez Lopez]
The fossil has been dated to about seventy-five million years ago, so less than ten million years before the Chicxulub Meteorite collision ended the non-avian dinosaurs' hegemony.  And the weirdest thing about it is that it's nowhere near any of the ankylosaurs we know about; most of that group were from western North America, which at the time was separated from what is now South America by a large swath of ocean.  There's some speculation that this might be a species that had relatives in Antarctica, which was much closer, but that continent is so poorly explored no one can be certain.  In any case, it once again highlights how little we actually know about prehistoric flora and fauna.
It gets me thinking about what surprises we'd have in store if we were to go back in time to see what the Cretaceous landscape really looked like.  Not only would we be shocked at the colors and body coverings (hair, fur, feathers, etc.), which rarely ever fossilize, but there would be a stunning diversity of plants and animals that we had no idea about.  And not to end on an elegiac note, but consider what that says about our current biodiversity -- what's lost is truly lost forever, most of it lost so completely our distant descendants a million years hence (assuming there are any) would never have an inkling that it had ever existed.
*******************************
As I've mentioned before, I love a good mystery, which is why I'm drawn to periods of history where the records are skimpy and our certainty about what actually happened is tentative at best.  Of course, the most obvious example of this is our prehistory; prior to the spread of written language, something like five thousand years ago, most of what we have to go by is fossils and the remnants of human settlements.
Still, we can make some fascinating inferences about our distant ancestors.  In Lost Civilizations of the Stone Age, by Richard Rudgely, we find out about some of the more controversial ones -- that there are still traces in modern languages of the original language spoken by the earliest humans (Rudgely calls it "proto-Nostratic"), that the advent of farming and domestication of livestock actually had the effect of shortening our average healthy life span, and that the Stone Age civilizations were far more advanced than our image of "Cave Men" suggests, and had a sophisticated ability to make art, understand science, and treat illness.
None of this relies on any wild imaginings of the sort that are the specialty of Erich von Däniken, Zecharia Sitchin, and Giorgio Tsoukalos; and Rudgely is up front with what is speculative at this point, and what is still flat-out unknown.  His writing is based in archaeological hard evidence, and his conclusions about Paleolithic society are downright fascinating.
If you're curious about what it was like in our distant past, check out Lost Civilizations of the Stone Age!
[Note: if you purchase this book using the image/link below, part of the proceeds goes to support Skeptophilia!]