Our desire to adorn our bodies goes back a very long way.
Decorative clothing, above and beyond any necessity for warmth; cosmetics and hair dyes; more-or-less permanent features like piercings and tattoos; removable bits like jewelry.  The reasons for these probably are as many and varied as the adornments themselves -- self-expression, attractiveness to potential lovers, shows of dominance or wealth, and ritualistic or magical significance probably are four of the more common ones.  But for whatever the reason, I know of no other species that so deliberately and routinely alters their appearance.
The reason the topic comes up is the recent discovery of a 41,500-year-old decorated pendant made of mammoth ivory in Stajnia Cave, a natural rock formation in southern Poland.  The piece is fascinating right from the get-go when you find out that the scientists believe it was fashioned and decorated soon after the unfortunate mammoth's death, so we're talking about humans living in close proximity to one of the most iconic prehistoric mammals.  "An old mammoth tusk would have been unworkable for shaping the Stajnia ornament and carving the punctate motif," said Sahra Talamo of the University of Bologna, who co-authored a paper on the find that was published in Nature this week.  He added that the damp climate of southern Poland at the time made bones and ivory degrade quickly, so it must have been from a recently-deceased animal.
The pendant is oval-shaped, with a large hole (possibly for suspending it on a string so it could be worn) and a series of smaller dots.  Here's a photograph of it: 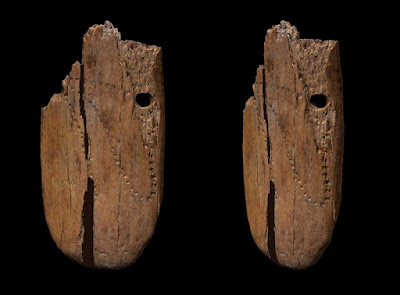 [Image by Antonino Vazzana]
Also found at the site was an awl made from a horse bone -- possibly the tool used to drill the holes in the ivory pendant.
"Whoever made the artifacts from Stajnia clearly had language, and the nature of the artifacts themselves give us a fascinating insight into what the makers may have valued, and their world," said Laura Basell, of the the University of Leicester.  "It is reasonable to suggest that horses and mammoths were really important in their lives and these objects have meaning on multiple levels."

Well, maybe.  It's kind of thin ice to draw too many inferences about a culture based upon one artifact, or even a bunch of them.  I'm reminded of Horace Mitchell Miner's scathing satire on anthropological papers called "Body Ritual Among the Nacirema," published in 1956, which looks at American culture ("Nacirema," of course, is "American" backwards) solely by drawing inferences upon our artifacts and a slim set of observations of our behaviors.  Here's a passage about what anthropologists might make of our medicine cabinets:

The focal point of the shrine is a box or chest which is built into the wall.  In this chest are kept the many charms and magical potions without which no native believes he could live.  These preparations are secured from a variety of specialized practitioners.  The most powerful of these are the medicine men, whose assistance must be rewarded with substantial gifts.  However, the medicine men do not provide the curative potions for their clients, but decide what the ingredients should be and then write them down in an ancient and secret language.  This writing is understood only by the medicine men and by the herbalists who, for another gift, provide the required charm.

The charm is not disposed of after it has served its purpose, but is placed in the charmbox of the household shrine.  As these magical materials are specific for certain ills, and the real or imagined maladies of the people are many, the charm-box is usually full to overflowing.  The magical packets are so numerous that people forget what their purposes were and fear to use them again.  While the natives are very vague on this point, we can only assume that the idea in retaining all the old magical materials is that their presence in the charm-box, before which the body rituals are conducted, will in some way protect the worshiper.

Beneath the charm-box is a small font.  Each day every member of the family, in succession, enters the shrine room, bows his head before the charm-box, mingles different sorts of holy water in the font, and proceeds with a brief rite of ablution.  The holy waters are secured from the Water Temple of the community, where the priests conduct elaborate ceremonies to make the liquid ritually pure.

So the ivory pendant might be jewelry, or might have served some other unknown purpose.  Almost 42 millennia later, it's a little difficult to be certain.

Be that as it may, it's an amazing find.  And if it is jewelry, it shows this drive for adornment goes back a long way.  Myself, I've never been a big jewelry-wearer; mostly I just wear my wedding ring.  As far as clothing goes, I have a fashion sense that frequently makes my wife wonder if I know how to use an iron, or possibly even look in a mirror.  I make up for it, however, with some large and complex tattoos, which I've written about here before (the linked post has pics, if you're curious).  So I guess I'm no stranger to the decorative urge myself.

In any case, it's mind-boggling to think about what life must have been like back then, squarely in the middle of the Last Glacial Period, when the people in central Europe co-existed with mammoths, woolly rhinoceros, and cave lions.  Despite the harshness of the climate and the dangers of running afoul of one of these big critters, they took the time to carve up and decorate mammoth ivory -- which shows that whatever the purpose, they weren't so different from us today.