The eye in the sky

It's been awfully hard to keep my spirits up lately.

There are the ongoing issues -- the Omicron spike of COVID worldwide (and watching helplessly as callous politicians turned vaccination into a partisan trump card), and the slow slide of my own country into something very like fascism -- but above and beyond that, I've had a hell of a run personally.  For a variety of reasons I've cut ties with the publisher I worked with for six years, I lost one good friend after a valiant fight with multiple sclerosis only days after another had suffered a debilitating stroke, and I hurt my back this summer and have been unable to engage in my favorite pastime of running for six months.  I blogged about the loss of our beloved old dog from some kind of nasty virus last month -- made worse by the fact that three days later, our other dog got the same disease (we spent most of Thanksgiving Day in the emergency veterinary hospital with him), and just last week, our new dog got it, too.

Both, fortunately, made a complete recovery, but was touch and go with both of them for a while.

When you get a run of calamities like this, it's easy to slip into despondency.  I've definitely had my moments in that dreadful place in the past year.  The only remedy, I've found, is to force my vision to turn outward, away from the troubles in my life large and small, and remind myself that even when things seem like they're terrible, we're still immersed in a grand, awe-inspiring, and beautiful universe.

That's why I found the launching of the James Webb Space Telescope on Christmas morning such a welcome respite.  It's easy enough to look around you and come to the conclusion that all humans are awful -- certainly, the media thrives on fostering that view -- but when you see something like this come off without a hitch, it's a nice reminder that our species is capable of truly amazing things.

"The James Webb Space Telescope represents the ambition that NASA and our partners maintain to propel us forward into the future," said NASA Administrator Bill Nelson. "The promise of Webb is not what we know we will discover; it's what we don't yet understand or can't yet fathom about our universe. I can't wait to see what it uncovers!"
The JWST is the successor to the famed Hubble Space Telescope, and is the largest, most powerful, and most sophisticated space observation apparatus ever launched.  The array of astronomical phenomena it will study is mind-boggling -- everything from exoplanets to the galactic distribution of dark matter to the unimaginably luminous and distant quasars and the cosmic microwave background radiation that is the remnant of the first microseconds after the Big Bang. 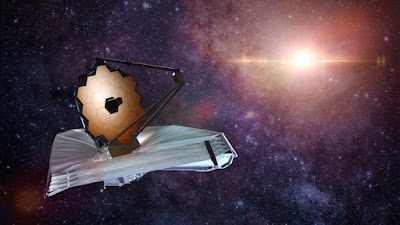 [Artist's rendition of the James Webb Space Telescope is in the Public Domain courtesy of NASA/JPL]
"The launch of the Webb Space Telescope is a pivotal moment -- this is just the beginning for the Webb mission," said Gregory L. Robinson, Webb's program director at NASA Headquarters.  "Now we will watch Webb's highly anticipated and critical 29 days on the edge.  When the spacecraft unfurls in space, Webb will undergo the most difficult and complex deployment sequence ever attempted in space.  Once commissioning is complete, we will see awe-inspiring images that will capture our imagination."
It's anticipated that it will take six months before the JWST is fully operational, and I can't even imagine how it must feel for the people who have invested so much time, energy, and effort into building and launching it.  When the first images come rolling in, probably some time in June of 2022, you can bet there'll be champagne flowing liberally.
Of course, as an astronomy buff, the whole thing is tremendously exciting to me, but more than that, to me it's a symbol that even as dismal as things have been, there's still reason to hope.  Yes, we're capable of horrible things -- acts of hate and violence, narrow-mindedness, power-hungriness -- but we're also capable of dazzling flights of the mind, tremendous creativity, and amazing beauty.  It reminds me of the end of Max Ehrmann's famous poem "Desiderata," which (although I've read it many times) never fails to bring me to tears.  It seems like a fitting way to end this post:

Whether or not it is clear to you, no doubt the universe is unfolding as it should.  Therefore be at peace with God, whatever you conceive Him to be.  And whatever your labors and aspirations, in the noisy confusion of life, keep peace in your soul.  With all its sham, drudgery and broken dreams, it is still a beautiful world.  Be cheerful.  Strive to be happy.