Springboarding off yesterday's post, about a discovery of fossils that seem to have come from animals killed the day the Chicxulub Meteorite struck 66 million years ago, today we have a paper in arXiv that looks at why the meteorite hit in the first place.

When you're talking about an event that colossal, I suppose it's natural enough to cast about for a reason other than just shrugging and saying, "Shit happens."  But even allowing for that tendency, the solution landed upon by Leandros Perivolaropoulos, physicist at the University of Ioannina (Greece), seems pretty out there.

Perivolaropoulos attributes the meteorite strike to a sudden increase in Newton's gravitational constant, G -- the number that relates the ratio of the product of two masses and the square of the distance between them to the magnitude of the gravitational force:

Perivolaropoulos's hypothesis is that millions of years ago, there was a sudden jump in the value of G by about ten percent.  As you can tell from the above equation, if you keep the masses and the distance between them constant, F is directly proportional to G; if G increased by ten percent, so would the magnitude of the gravitational force.  His thought is that this spike in the attractive force caused the orbits of asteroids and comets to destabilize, and sent them hurtling in toward the inner Solar System.  The result: collisions that marked the violent, sudden end of the Mesozoic Era and the hegemony of the dinosaurs.

To be fair to Perivolaropoulos, his surmise is not just based on a single meteorite collision.  He claims that this increase in G could also resolve the "Hubble crisis" -- the fact that two different measures of the rate of the expansion of the universe generate different answers.  The first, using the cosmic microwave background radiation, comes up with a value of 67.8 kilometers/second/megaparsec; the second, from using "standard candles" like Cepheid variables and type 1A supernovas, comes up with 73.2.  (You can read an excellent summary of the dispute, and the current state of the research, here.) 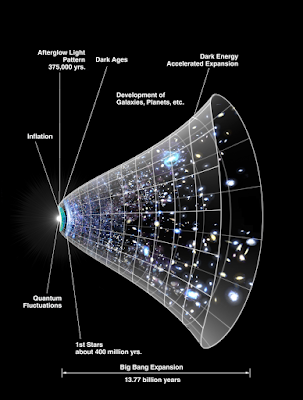 Perivolaropoulos says that his hypothesis takes care of both the Hubble crisis and the reason behind the end-Cretaceous meteorite collision in one fell swoop.

Okay, where to start?

There are a number of problems with this conjecture.  First -- what on earth (or off it) could cause a universe-wide alteration in one of the most fundamental physical constants?  Perivolaropoulos writes, "Physical mechanisms that could induce an ultra-late gravitational transition include a first order scalar tensor theory phase transition from an early false vacuum corresponding to the measured value of the cosmological constant to a new vacuum with lower or zero vacuum energy."  Put more simply, we're looking at a sudden phase shift in space/time, analogous to what happens when the temperature of water falls below 0 C and it suddenly begins to crystallize into ice.  But why?  What triggered it?

Second, if G did suddenly increase by ten percent, it would create some serious havoc in everything undergoing any sort of gravitational interaction.  I.e., everything.  Just to mention one example, the relationship between the mass of the Sun, the velocity of a planet, and the distance between the two is governed by the equation

So if the Earth (for example) experienced a sudden increase in the value of G, the radius of its orbit would (equally suddenly) decrease by ten percent.  Moving the Earth ten percent closer to the Sun would, of course, lead to an increase in temperature.  Oh, he says, but that actually happened; ten million years after the extinction of the dinosaurs we have the Paleocene-Eocene Thermal Maximum, when the temperatures went up by something like 7 C.  However, the PETM is sufficiently explained by a fast injection of five thousand gigatons of carbon dioxide into the atmosphere and oceans, likely triggered by massive volcanism in the North Atlantic Igneous Province -- and there's significant evidence of a carbon dioxide spike from stratigraphic evidence.  No need for the Earth to suddenly lurch closer to the Sun.

It wouldn't just affect orbits, of course.  Everything would suddenly weigh ten percent more.  It would take more energy to run, jump, even stand up.  Mountain building would slow down.  Anything in freefall -- from boulders in an avalanche to raindrops -- would accelerate faster.  Tidal fluctuations would decrease (although with the Moon now closer to the Earth, maybe that one would balance out).

Also, if G did increase everywhere -- it's called the "universal gravitational constant," after all -- then the same thing would have happened simultaneously across the entire universe.  Then, for some reason, there was a commensurate decrease sometime between then and now, leveling G out at the value we now measure.  So we really need not one, but two, mysterious unexplained universal phase transitions, as if one weren't bad enough.

Then there's the issue that the discrepancy in the measurement in the Hubble constant isn't as big as all that -- it's only 3.4 sigma, not yet reaching the 5 sigma threshold that is the touchstone for results to be considered significant in (for example) particle physics.  Admittedly, 3.4 sigma isn't something we can simply ignore; it definitely deserves further research, and (hopefully) an explanation.  But explaining the Hubble constant measurement issue by appeal to an entirely different set of discrepant measurements that have way less experimental support seems like it's not solving anything, it's just moving the mystery onto even shakier ground.

Last, though, I come back to two of the fundamental rules of thumb in science; Ockham's razor (the explanation that adequately accounts for all the facts, and requires the fewest ad hoc assumptions, is most likely to be correct) and the ECREE principle (extraordinary claims require extraordinary evidence).  Perivolaropoulos's hypothesis not only blasts both of those to smithereens, it postulates a phenomenon that occurred once, millions of years ago, then mysteriously reversed itself, and along the way left behind no other significant evidence.

I hate to break out Wolfgang Pauli's acerbic quote again, but "This isn't even wrong."

Now, to be up front, I'm not a physicist.  I have a distantly-remembered B.S. in physics, which hardly qualifies me to evaluate an academic paper on the subject with anything like real rigor.  So if there are any physicists in the studio audience who disagree with my conclusions and want to weigh in, I'm happy to listen.  Maybe there's something going on here that favors Perivolaropoulos's hypothesis that I'm not seeing, and if so, I'll revise my understanding accordingly.

But until then, I think we have to mark the Hubble crisis as "unresolved" and the extinction of the dinosaurs as "really bad luck."