Aficionados of The X Files will no doubt recall "Field Trip," which ranks amongst the creepiest, twistiest, most atmospheric episodes they ever did.  Fox Mulder and Dana Scully are charged with investigating the disappearance of a young couple while on a hiking trip -- and after that, their mantra "Trust nothing and no one" becomes literally true. 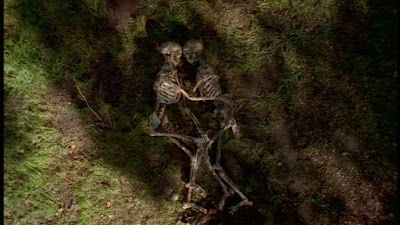 What had happened (obviously, *spoiler alert*) is that first the couple, and then Mulder and Scully, had been attacked by an underground fungus that works in a particularly insidious way.  Inhaling the spores, which are released whenever you take a step on the ground, induces hallucinations intended to make you hold still while the fungus slowly digests you.  It stimulates your brain with images while dissolving away your body.  Every time the real reality -- the tendrils of slime mold creeping across your skin -- intrudes, the hallucinations become more intense, more engaging, more real.

Until there's nothing left of you to fight back.

While the details of the episode are fiction, nature itself has plenty of examples that are just as horrifying.  The pathogen Toxoplasma gondii, common not only in humans but in domestic cats, wild mice, and rats, alters the brains of the hosts, but each in its own way.  Rats and mice become unafraid of predators, and in fact become attracted to the scent of cat urine; cats and humans become more affectionate -- and neurotic.  Each of those alterations in behavior is engineered by the parasite to maximize its chances of jumping to another host.  Lancet worms (Dicrocoelium dendriticum) parasitize ground-dwelling ants, and induce them to climb blades of grass and simply wait there, because the worm has a second stage of its life cycle in which it has to pass through the digestive tract of a ruminant, like a deer or a cow.  So it basically triggers the ant to commit suicide so it can make the jump.  Worse of all -- and most like the fungus in "Field Trip" -- there are the baculoviruses, which infect caterpillars.  Once parasitized, the caterpillars become attracted to sunlight, so they climb to the very tops of tree branches, where they die.  And then explode, showering their comrades lower down in the tree with viral particles.

Another way that "Field Trip" got it right, though, was some of the nasty stuff pulled by members of kingdom Fungi.  You have to wonder how we ever figured out that any of them were edible: 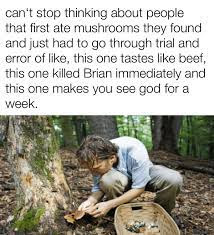 Not only are some of them amongst the most toxic living things known (the closely-related death cap [Amanita phalloides] and destroying angel [Amanita bisporigera] mushrooms, for example), they have a lot of other insidious strategies.  Most fungi are decomposers, but like the fungus in "Field Trip," a few of them have developed methods for hastening their unfortunate prey into decomposition.

This, in fact, is why the topic comes up; a new study of oyster mushrooms (Pleurotus ostreatus) found that the underground mycelium (network of root-like tubes) of the species actually hunts and kills nematodes (roundworms) using something one of researchers described as "a lollipop filled with nerve gas."  The toxocysts, as the lollipops are called, are consumed by the nematodes, and when they burst, it releases a chemical called 3-octanone, which triggers calcium to flow into the muscles of the worm.  This paralyzes it -- and the fungus has dinner.

Oyster mushrooms aren't the only species that goes after nematodes.  It makes sense to choose them as prey; nematodes are one of most numerous animals in the world.  I still recall my invertebrate zoology professor grossing us all out (something he specialized in) by telling us that if you made all organic matter disappear except for nematodes, you could still see where all the other life forms were by the haze of parasitic nematodes they'd been carrying, outlining where they'd been like some kind of ghostly remnant of their bodies.

But the fungi still maintain the upper hand.  There are fungi which have evolved harpoons for skewering nematodes.  Others create what amount to glue traps.  One species produces something like a spiked collar -- with the spikes pointing inward.  The weirdest one is the fungus Arthrobotrys oligospora, which creates a noose.  When a nematode crawls through the noose, the loop suddenly inflates, strangling the hapless worm, which is then digested.

Nature is red in tooth and claw, man.  And it's not just the animals.  Remember the first line of Stephen King's wonderful novel The Girl Who Loved Tom Gordon: "The world had teeth, and could bite you with them any time it wanted."

Anyhow, I've probably skeeved you out sufficiently for one day.  Just think about all this next time you see innocent-looking little mushrooms popping up in your lawn.

You never know what's going on beneath the surface.