Calling a fraud a fraud: James McCormick and the bomb dowsers

I know I tend to write about frustrating topics -- my usual fare is illogic, irrationality, gullibility, hoaxes, and general foolishness.  And it's got to be wearing, at times, to read a non-stop parade of human craziness and credulity.  So it's heartening to me that today we'll start the day with a positive story -- a story of the triumph of science over woo-woo nonsense.

You may have heard about James McCormick, the man who developed a "bomb detector."  The device, he said, worked on the same principle as a dowsing rod; it was a metal antenna that sits in a hole in a plastic sleeve, and it detects the "electromagnetic disturbance" created by the bomb and swivels toward it.  (The whole thing is described in detail in Phil Plait's wonderful blog Bad Astronomy, in an article called "Dowsing for Bombs" that then appeared in Slate.) 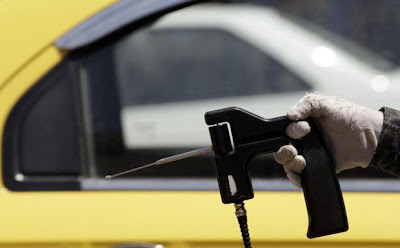 You can see how such a device, if it worked as advertised, would be invaluable to the military.  The problem is, it didn't work.  The whole thing was basically just a plastic handle with a ten-dollar Radio Shack antenna glued into a rotating plastic cylinder.  But the military was suckered right in -- to the tune of between $16,500 and $60,000 per device.  Well, it wasn't long before the people in charge realized that they'd been sold a bill of goods; as Plait said, the devices "might as well have been crayon boxes full of rocks.  They were useless."

And, they cost lives.  The Iraqis began to use them at terrorist checkpoints, and (of course) their reliance on them caused them to miss bombs -- including one incident where terrorists sneaked two tons of explosives past a checkpoint, right past McCormick's dowsing rods, resulting in 155 casualties.

Well, the military finally wised up, and McCormick was arrested and charged with fraud.  And last week, he was convicted.

This should be a cause for celebration by skeptics the world over -- that finally, a major governmental institution has seen to it that science triumphs over the peddlers of woo-woo.  But I do have a question, however, that tempers my jubilation.

Why stop at McCormick?  If what he was doing is fraud -- in the sense that he was knowingly hoodwinking the gullible, making claims that were demonstrably false, and becoming filthy rich in the process -- then so are the homeopaths.  So are the psychics, the astrologers, the faith healers.  And yet we still have psychics like Theresa Caputo, the "Long Island Medium," who is booked for readings two years ahead and allegedly charges $400 for a thirty-minute reading over the phone.  (I say "allegedly" because she doesn't reveal her fees publicly; all we have to go by is claims by former clients.)  We still have astrologers like Susan Miller, "astrologer to the New York City fashion set," whose astrology website gets six million hits per month.  (If Skeptophilia gets six million hits in my lifetime, I will die a happy man.)  We still have faith healers like Peter Popoff, who was roundly debunked by James Randi and yet who still attracts tens of thousands of hopefuls to his "healing ministries."

We still have homeopathic "remedies" sold online -- and over the counter in damn near every pharmacy in the United States and western Europe.  Worse, there are groups like "Homeopaths Without Borders" making sure that their useless, discredited sugar pills and vials of water get distributed to needy (and poorly educated) people in places like Haiti, Honduras, and Guatemala, where they are used by the ill in place of actual, effective medications.

How is James McCormick guilty of fraud, and these people are not?

Oh, I know the difference is in who McCormick defrauded.  "Don't piss off the military-industrial complex" is a pretty good guide for life.  But even though the woo-woos of various stripes aren't ripping off the US Army -- they're just ripping off ordinary slobs like you and me -- the principle is the same.  They're making claims that are unscientific bullshit, are charging money for their useless services, and yet they seem to get away with it, day after day and year after year.

Okay, I know I said I was going to be positive, here.  And honestly, I'm glad that they nailed McCormick -- he richly merits everything he gets.  And perhaps this will act as a precedent; maybe the fact that the courts stood by reputable, testable science, and identified fraudulent woo-woo as such, will be one step toward pasting that same label on other deserving targets.

The bottom line is: the good guys won, for a change.  Let's hope that it's a trend.
Posted by Gordon Bonnet at 2:43 AM