Is it too much to ask for that we have some political candidates who unequivocally respect science?

In casting about for who else might be out there running for president other than The Big Two, I initially considered Jill Stein, nominee of the Green Party.  Stein has attractive ideas about fracking (against) and renewable energy (for), and I thought she might be worth supporting, not that she has a snowball's chance in hell of winning.  But a closer look indicated that either she's pandering to the anti-science cadre on the far left, or else she's an anti-science loon herself. 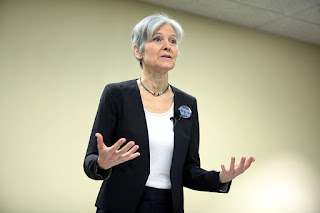 Let's start with her attitudes toward vaccines.  Here's a direct quote from Stein on the topic:


I don’t know if we have an “official” stance, but I can tell you my personal stance at this point.  According to the most recent review of vaccination policies across the globe, mandatory vaccination that doesn’t allow for medical exemptions is practically unheard of.  In most countries, people trust their regulatory agencies and have very high rates of vaccination through voluntary programs.  In the US, however, regulatory agencies are routinely packed with corporate lobbyists and CEOs.  So the foxes are guarding the chicken coop as usual in the US.  So who wouldn’t be skeptical?  I think dropping vaccinations rates that can and must be fixed in order to get at the vaccination issue: the widespread distrust of the medical-indsutrial complex.

Vaccines in general have made a huge contribution to public health.  Reducing or eliminating devastating diseases like smallpox and polio.  In Canada, where I happen to have some numbers, hundreds of annual death from measles and whooping cough were eliminated after vaccines were introduced.  Still, vaccines should be treated like any medical procedure–each one needs to be tested and regulated by parties that do not have a financial interest in them.

Which sounds like waffling to me.  How about coming right out and saying, "Vaccines are safe, effective, and have saved thousands of lives.  End of discussion."  Worse still, as was pointed out over at SkepticalRaptor, she's wrong about the regulation of vaccines:


The FDA advisory committee for vaccines contains 17 members, all but two are academics with impeccable research and science credentials.  The other two, admittedly are from Big Pharma, but they also have impressive scientific backgrounds, and to impugn their character or any of the 17 others, is borderline libel.

Does Jill Stein have any evidence whatsoever that those 17 scientists are all handed bribes by Big Pharma to vote against the safety of American children?  Well, does she?

Then, there's the Green Party's official platform, which explicitly supports homeopathy and other useless treatment modalities:


Chronic conditions are often best cured by alternative medicine.  We support the teaching, funding and practice of holistic health approaches and, as appropriate, the use of complementary and alternative therapies such as herbal medicines, homeopathy, naturopathy, traditional Chinese medicine and other healing approaches.

But in the words of the infomercial, "Wait... there's more!"  In a recent forum, Stein went on record as saying that wifi should be removed from schools because of its effects on children's brains:


We should not be subjecting kids' brains to that.  We don't follow that issue in this country, but in Europe where they do, they have good precautions around wireless.  Maybe not good enough.  Because it's really hard to study this stuff.  You make guinea pigs out of whole populations and then we discover how many of them die.  This is the paradigm for how public health works in this country.  This is outrageous.  This is why we need to take back not just our schools, but take back the whole system of how we create health, how we protect health, and our research institutions as well, to be publicly funded and publicly accountable as well.  We've lost trust in our regulatory agencies, when the vice president of Monsanto is in charge of the... not the DEA, which is it... the FDA.

Well, no, it's actually not hard at all to study this stuff.  There have been dozens of well-controlled studies of the dangers of wifi, and all of them have found... nothing.  According to the World Health Organization:

And once again, her defense for her views jumps to claiming that Evil Corporations Run Everything, so q.e.d., and (of course) finishes up with the argumentum ad Monsantum -- which in this case isn't even correct.  The current commissioner of the FDA is Dr. Robert Califf, who does have ties (as a paid consultant) to the pharmaceuticals industry, but has no connection whatsoever to Monsanto.

Worse still, did I mention that Jill Stein is a doctor herself?

Look, it's not that I expect a political candidate to be perfect, or to line up exactly with my own views on how things should go.  All of politics is a compromise.  But one thing I'm not willing to compromise is that anyone I support needs to respect science.  The fact that Dr. Jill Stein is not willing to go on record as declaring support for scientific findings that have been verified over and over smacks either of pandering to a vocal minority of far-left anti-science types, or of willful ignorance.  And in neither case can I vote for her in good conscience.
Posted by Gordon Bonnet at 2:24 AM