An epidemic of lunacy

We have a regrettable tendency to abandon reason entirely when we're confronted with scary circumstances.  I suppose it's understandable enough; we're emotional as well as logical, and when we're frightened the emotional parts of our brain tend to swamp the more rational bits.

Still, it'd be nice if we could control that tendency, because it would help to reduce our likelihood of falling for weird counterfactual explanations at the times that it's the most critical for us to keep our  heads screwed on straight.

Take, for example, the most recent Scary Circumstance, namely, the outbreak of Wuhan coronavirus that so far has killed just over a hundred people, sickened thousands, and (by some estimates) left over a hundred thousand people at risk of exposure. 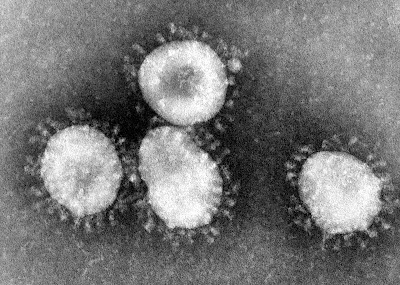 Coronaviruses [Image is in the Public Domain, courtesy of the CDC]

Worrisome stuff, isn't it?  The potential for a pandemic is there, and the unknowns about the virus still outnumber the knows -- the rate at which it's passed on (what the epidemiologists refer to as "R0"), whether it's mutating as it spreads, what the mortality rate is, whether it's contagious while an individual is still asymptomatic.  But as I alluded to earlier, "frightening unknown virus" does not equate to "I think I'll make bizarre shit up."

Let's start with something I've now seen four times on social media, although I couldn't find a good link to the origin of the claim.  This particular flavor of nonsense is that the coronavirus outbreak is particularly dangerous to a specific subset of humanity...

... people who have been vaccinated for other diseases.

It will come as no surprise that the people who are spreading this foolishness are the anti-vaxxers.  How exactly a vaccine for (say) mumps would make you more likely to contract coronavirus they never explain.  The reason for that, of course, is that there is no explanation, because the claim itself is idiotic.  The anti-vaxxers are simply looking for another horrible thing to blame on vaccines, and the Big Bad Guys pushing vaccination -- doctors and "Big Pharma."  And since there is no actual evidence vaccines are dangerous, and ample evidence they reduce your risk of a number of deadly diseases to near zero, if you're going to claim otherwise you pretty much have to spin your argument from whole cloth. 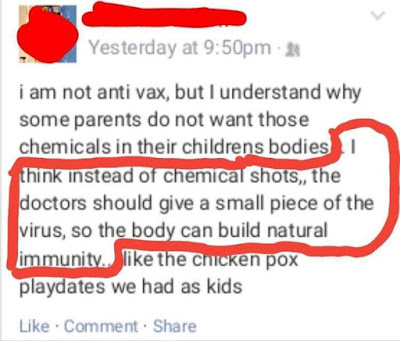 That feeling when you're so ignorant about vaccines you end up reinventing them by mistake.  [Screencap from Twitter]

Then, there's the even more insidious approach of the insane conspiracy theory group QAnon, who have a two-part claim: (1) that Bill Gates patented the Wuhan coronavirus in 2015 and is using it to kill off the weak in some sort of bizarre eugenics experiment; and (2) that all you have to do to cure a coronavirus infection is to drink bleach.

As far as the first part, I don't know what to say except "are you fucking kidding me right now?"  The second part, though, has been around for a while -- the bleach solution ("Miracle Mineral Solution," which contains chlorine dioxide, a highly toxic compound) has been touted as a cure-all for all sorts of viral and bacterial infections.  And the claim is correct in a sense; if you have a coronavirus infection and you drink Miracle Mineral Solution, you won't be sick any more.

Lastly, from the "How Do People This Stupid Exist?" department, we have the folks who apparently think that coronavirus has something to do with Corona beer, other than the fact that "corona" appears in both names.

Corona, I hasten to point out (probably unnecessarily), is the Latin word for "crown."  The virus got that name because it's covered with spiky projections that look a little bit crown-like; the beer was given that name because its manufacturers wanted people to think it was the King of Beers (another incorrect claim, as the King of Beers is clearly Guinness).  But the similarity between the names has evidently led some people to think that there is more to it than that, and Google searches for "beer virus" have gone through the roof.

What exactly people think the connection is, I have no idea.  My hopeful side tells me that maybe people are just wanting to find out if anyone really is silly enough to think that the beer contains the virus.  But my gut tells me that it's more likely there really are people who believe the beer is transmitting the virus, or the beer cures the virus, or possibly both at the same time.

Who the hell knows?

Anyhow -- until such time as a coronavirus vaccine is developed, the best way to avoid catching or passing on infection is to do what you (hopefully) are doing already during flu season -- wash your hands frequently, cover your mouth when you cough or sneeze, and if you're sick yourself, stay home.  Other than that, try to resist the temptation to let your emotions carry you away.  Epidemics are bad enough without loopy speculation getting in the way.