Of rhinos and puppies

You're not alone if you immediately think "Africa" when you hear the word "rhinoceros."  The two largest and best-known species -- the black (Diceros bicornis) and white (Ceratotherium simum) rhinos -- are both native to the southern parts of Africa.  There are three additional extant species in southern Asia, however; the Indian (Rhinoceros unicornis), Javan (Rhinoceros sondaicus), and Sumatran (Dicerorhinus sumatrensis) rhinos.  The latter two are amongst the most endangered mammals in the world, with only about 60 and 245 individuals left, respectively.

Rhinos, though, used to be much more diverse, and much more common.  One of the most remarkable fossils ever discovered is the Blue Lake rhino, a fifteen-million-year-old cast of an extinct rhinoceros species called Diceratherium in what is now eastern Washington state.  The "remarkable" part is that it's fossilized in igneous rock, which isn't supposed to happen -- fossils are supposed to all be in sedimentary rock, right?  But what happened is there was a colossal eruption fifteen million years ago that produced the Columbia River Flood Basalts, releasing an estimated 174,000 cubic kilometers of lava, an amount that's hard to fathom.  Anyhow, this poor rhino was peacefully grazing, minding its own business, and suddenly BAM, it gets hit by a fast-moving, highly liquid lava flow, its body entombed then burned away.  Fast forward to 1935, when a fossil hunter named Haakon Friele discovered a strange cave in a basalt formation, crawled inside with a flashlight, and somehow thought, "Hey, this hole is shaped just like a rhino."  A bit later, a crew of paleontologists from the University of California - Berkeley were called in, and they made a plaster cast of the interior -- and sure enough, it's a cast of a very surprised-looking rhino who was very much in the wrong place at the wrong time.

There were other rhino species more recently, however.  The woolly rhinoceros (Coelodonta antiquitatis) was an ice-age species that lived pretty much everywhere in what is now Asia and Europe, but started declining in population about forty thousand years ago, dwindling until only a remnant population was left in Siberia.  The last ones died fourteen thousand years ago, give or take. 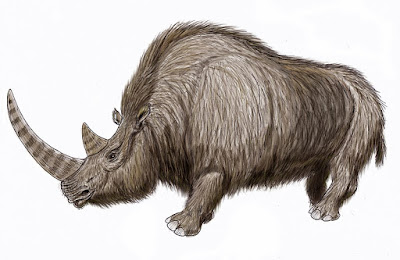 The blame for the woolly rhino's demise has been attributed to overhunting by early humans, but recent research suggests the cause was actually climate change.  In the paper, "Pre-Extinction Demographic Stability and Genomic Signatures in the Woolly Rhinoceros," by a team led by Edana Lord of the Swedish Museum of Natural History, we read the following:


Ancient DNA has significantly improved our understanding of the evolution and population history of extinct megafauna.  However, few studies have used complete ancient genomes to examine species responses to climate change prior to extinction.  The woolly rhinoceros (Coelodonta antiquitatis) was a cold-adapted megaherbivore widely distributed across northern Eurasia during the Late Pleistocene and became extinct approximately 14 thousand years before present (ka BP).  While humans and climate change have been proposed as potential causes of extinction, knowledge is limited on how the woolly rhinoceros was impacted by human arrival and climatic fluctuations.  Here, we use one complete nuclear genome and 14 mitogenomes to investigate the demographic history of woolly rhinoceros leading up to its extinction.  Unlike other northern megafauna, the effective population size of woolly rhinoceros likely increased at 29.7 ka BP and subsequently remained stable until close to the species’ extinction.  Analysis of the nuclear genome from a ∼18.5-ka-old specimen did not indicate any increased inbreeding or reduced genetic diversity, suggesting that the population size remained steady for more than 13 ka following the arrival of humans.  The population contraction leading to extinction of the woolly rhinoceros may have thus been sudden and mostly driven by rapid warming in the Bølling-Allerød interstadial.

So at least that's one calamity we're not responsible for.

On the other hand, another recent discovery shows that we might not have doomed the woolly rhino, but our best friends might have had a hand -- um, a paw -- in it.  A friend and long-time loyal reader of Skeptophilia sent me a link to an article about a mummified body of a dog found in Siberia that, when analyzed, was found to have bits of meat from a woolly rhino it its stomach.  "This puppy, we know already, has been dated to roughly 14,000 years ago," said researcher Love Dalén, also of the Swedish Museum of Natural History.  "We also know that the woolly rhinoceros goes extinct 14,000 years ago.  So, potentially, this puppy has eaten one of the last remaining woolly rhinos."

Dogs: Eating Stuff They Shouldn't Eat For the Past Fourteen Thousand Years.

So that's today's excursion into weird cul-de-sacs of zoology.  And honestly, I'm just as glad the temperate-area rhino species are gone, cool as they undoubtedly were.  We have enough trouble keeping the groundhogs and rabbits out of the vegetable garden, I can't imagine how we'd deal with rhinos tromping around the place.