One of my favorite movies, which I have seen I don't even know how many times, is Jurassic Park.

I'm honestly not much of a movie-watcher, but the first time I saw this one, it grabbed me from the opening scene and pretty much never let go.  Besides the great acting (Jeff Goldblum being top of the list... I've been known to swipe his line, "I hate it when I'm always right") and eye-popping special effects, it also gave us a window into something that has been the subject of speculation for centuries: the behavior of extinct animals.

Some of what Crichton, Spielberg et al. came up with was fanciful and almost certainly wrong; a case in point is the frill-waving, venom-spitting Dilophosaurus that ate the villainous Dennis Nedry.  Now, don't get me wrong; it's a great scene, and Nedry deserved everything he got, and more.  But we don't know if the crests of the Dilophosaurus were even retractable; this idea came from an only distantly-related reptile species, the Australian frilled lizard.  And the idea that it had venomous saliva is a complete fiction, given that spit doesn't fossilize all that well. 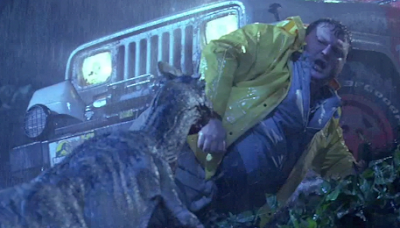 Dennis Nedry about to become dinner.  That'll teach him for saying "No wonder you're extinct.  I'm gonna run you over when I come back down."

Likewise the terrifying pack-hunting and deliberate, highly intelligent distraction behavior ("Clever girl") of the Velociraptors is entertaining fiction, based upon their relatively large cranial capacity, big nasty pointy teeth, and documented accounts of pack hunters like coyotes using a decoy to drive prey toward its waiting pack mates.  It's unlikely that Velociraptors (or any other dinosaur) were that smart, and I doubt seriously that any of them could figure out how to unlatch a freezer door.

What's cool, though, is that there are some inferences about dinosaur behavior (and the behavior of other extinct animals) we can make from fossil evidence alone.  The iconic scene where Alan Grant and his friends are nearly run over by a stampeding herd of Gallimimus was based upon a set of tracks that may represent exactly what the movie depicts -- a group of small dinosaurs fleeing a larger carnivorous one.  (Some paleontologists still dispute this interpretation, however.)  But the fact remains that we can use fossils to make some shrewd guesses about behavior.

Take, for example, the tracks found recently of a three-toed theropod dinosaur in the Rioja region of Spain.  The species is impossible to tell from the tracks alone, but based upon analysis of the sediment layers, the researchers learned four things:

So chances are, it was chasing prey.  But there was no evidence to determine whether the prey got away or was turned into a Dennis-Nedry-style all-you-can-eat buffet.

A dangerous time, the mid-Cretaceous.  While a lot of us dinosaur aficionados would love a chance to go back in time and see what it was like, my guess is that once there, most of us would have a life expectancy of under six hours.  So as much as I love Jurassic Park, I'm just fine with not re-creating it.

In any case, it's exciting to know that even though a hundred million years has passed, we can still make some inferences about how these long-extinct animals behaved.  Fossils like the theropod tracks in Spain can give us a window into a long-vanished world, and the fascinating, beautiful, and terrifying animals that inhabited it.

*****************************************
I've mentioned before how fascinated I am with the parts of history that still are largely mysterious -- the top of the list being the European Dark Ages, between the fall of Rome and the re-consolidation of central government under people like Charlemagne and Alfred the Great.  Not all that much was being written down in the interim, and much of the history we have comes from much later (such as History of the Kings of Britain, by Geoffrey of Monmouth, chronicling the events of the fourth through the eighth centuries C.E. -- but written in the twelfth century).
"Dark Ages," though, may be an unfair appellation, according to the new book Matthew Gabriele and David Perry called The Bright Ages: A New History of Medieval Europe.  Gabriele and Perry look at what is known of those years, and their contention is that it wasn't the savage, ignorant hotbed of backwards superstition many of us picture, but a rich and complex world, including the majesty of Byzantium, the beauty and scientific advancements of Moorish Spain, and the artistic genius of the master illuminators found in just about every Christian abbey in Europe.
It's an interesting perspective.  It certainly doesn't settle all the questions; we're still relying on a paucity of actual records, and the ones we have (Geoffrey's work being a case in point) sometimes being as full of legends, myths, and folk tales as they are of actual history.  But The Bright Ages goes a long way toward dispelling the sense that medieval Europe was seven hundred years of nothing but human misery.  It's a fascinating look at humanity's distant, and shadowed, past.
[Note: if you purchase this book using the image/link below, part of the proceeds goes to support Skeptophilia!]