I've written here before about the rather sobering topic of mass extinctions, and from what reading I've done on the topic, it always leaves me thinking about how fragile Earth's ecosystems are.  Most of the biggest extinctions were not due to a single cause, though; for example, the Ordovician-Silurian extinction of about 445 million years ago seems to have been touched off by plate tectonics -- the massive southern continent of Gondwana meandered across the south pole, leading to ice cap formation, massive glaciation, and a drop in sea level.  However, there followed a huge drop in atmospheric oxygen and spike in sulfur, leading to worldwide oceanic anoxia.  The result: an estimate 60% mortality rate in species all over the Earth.
Anoxia is also thought to have played a role in the largest mass extinction ever, the Permian-Triassic extinction of 252 million years ago.  This one, however, seems to have begun with a catastrophic volcanic eruption that boosted the carbon dioxide in the atmosphere, and thus the temperature.  Temperature is inversely related to oxygen solubility, so as the oceans warmed, what oxygen was left in the air didn't dissolve as well, and nearly everything in the oceans died (a mortality rate estimated at an almost unimaginable 95%).  This caused an explosive growth in anaerobic bacteria, pumping both carbon dioxide and methane into the atmosphere.  The average temperature skyrocketed by as much as ten degrees Celsius.
Even the smaller extinctions seldom come from one cause.  I wrote recently about the Eocene-Oligocene extinction, which wiped out a good many of Africa's mammal species (our ancestors survived, fortunately for us), and was apparently an evil confluence of three unrelated events -- rapid cooling of the climate after the Paleocene-Eocene Thermal Maximum, a massive meteorite collision near what is now Chesapeake Bay, and explosive volcanism in Ethiopia.
The exception to the rule seems to be the most famous extinction of all, the Cretaceous-Tertiary extinction of 66 million years ago.  The one that ended the hegemony of the dinosaurs.  I always find it wryly amusing when the dinosaurs are described as some kind of evolutionary dead-end, as if their failure to survive to today is indicative that they were inferior or maladapted.  In fact, the dinosaurs as such were the dominant group of terrestrial animals for almost two hundred million years -- from the late Permian to the end of the Cretaceous -- and that's not counting birds, which are (frankly) dinosaurs, too.  That means if you consider the earliest modern humans to have lived in Africa on the order of three hundred thousand years ago, the dinosaurs kind of ran the planet for over six hundred times longer than we've even existed.
And in the blink of an eye, everything changed.  Far from being an evolutionary cul-de-sac, the dinosaurs were doing just fine, when a meteor ten kilometers in diameter slammed into the Earth near what is now the Yucatán Peninsula of Mexico.  And now scientists have been able to pinpoint not only where the collision happened, but what time of year -- the middle of the Northern Hemisphere's spring. 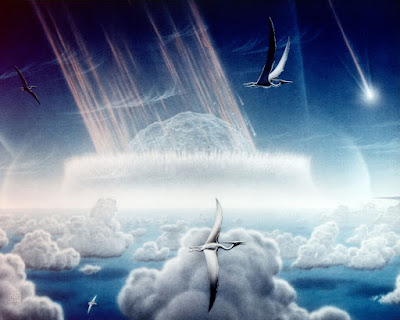 The Chicxulub Impact, as visualized by artist Donald E. Davis [image is in the Public Domain courtesy of NASA]
Paleontologists working in North Dakota have found a rich fossil site that was created on that fateful day.  Pre-collision, the area was a wet lowland forest with a shallow river.  The slow-moving water was the home of paddlefish and sturgeon, swimming slowly and nosing around in the mud for food.  Then, three thousand kilometers away, the meteor struck.  The shock wave ejected a sheet of superheated steam and molten rock skyward; the impact, which occurred in what was (and still is) a shallow marine region, generated a tsunami the likes of which I can't even imagine.  The southern part of North America got flash-fried by the heat generated by the strike; only a few minutes later, it was followed by a wall of water the height of a skyscraper that swept across the land at an estimated five hundred kilometers an hour.
The first thing the fish would have noticed, though, is a rain of tiny globs of molten glass that sizzled as they hit the water and settled out, coating the riverbed and clogging their gills.  Then the tsunami hit, burying the site under thick layers of sediment.  By the time things calmed down, most of the living things in North America were dead, their fossils left behind as a near-instantaneous photograph of one of the worst days the Earth has ever seen.
It's the quickness of the event that allowed scientists to figure out when it happened.  Paddlefish bones form growth layers -- a little like the rings inside a tree trunk -- and all of the paddlefish fossils from the site show an increasing rate of growth, but not yet at its annual peak (which occurs in the warmest parts of summer).  The Chicxulub meteorite seems to have struck the Earth in April or May.
This may be another reason why the Northern Hemisphere flora and fauna took a much bigger hit than the ones in the Southern Hemisphere.  The initial explanation was that the meteor struck the Earth at an angle, on with a trajectory on the order of forty-five degrees south of vertical, so the shower of molten debris mostly got blasted northward.  (This may well be true; the current research doesn't contradict that assessment.)  But if the strike occurred in the Northern Hemisphere's spring, when plants are leafing out and flowering, and animals increasing in activity, it would have been catastrophic.  The ones in the Southern Hemisphere, heading into fall and winter, would have been in the process of powering down and moving toward dormancy and hibernation, and may have been more insulated from the effects.
Besides the obvious fascination of an event so cataclysmic, it's just stupendous that we can analyze the evidence so finely that we can determine what time of year it occurred, 66 million years later.  It also highlights how suddenly things can change.  The dinosaurs had been around for two hundred million years, surviving not only the colossal Permian-Triassic extinction but the smaller (but still huge) end-Triassic extinction, that took out thirty percent of the species on Earth.  In one particular April of 66 million years ago, a quick look around would have led you to believe that everything was fine, and that the dinosaurs and other Mesozoic critters weren't going anywhere.
A day later, the entire face of the Earth had changed forever.