Death in the seas

It's amazing what scientists sometimes miss.

This is not meant to be any kind of indictment of scientists, or science in general.  It's just part of the game, honestly; sometimes it takes a while for the evidence to be uncovered, while sometimes previous theories act as blinders -- such as the long-held idea of the Earth's geology being driven by geosynclines, huge downward folds in the Earth's crust, that were supposed to explain both sedimentary rock strata and orogeny (mountain-forming).  Never mind that no one could quite explain why geosynclines occurred; most of it seemed to be hand-waving talk about masses of eroded sediments causing blocks of crust to fault and tilt like a teeter-totter.  Despite there being no plausible mechanism, this idea was so entrenched in the scientific minds of the nineteenth and early twentieth century that even as the evidence for plate tectonics accrued, most geologists dismissed it as fancy -- until the discovery of the magnetic stripes on either side of the Mid-Atlantic Rift Zone proved plate tectonics beyond any question.

But like I said, sometimes the problem is that the evidence takes a while to come together.  For example, consider the paper in Nature Ecology & Evolution that appeared a while back, called, "The Pliocene Marine Megafauna Extinction and Its Impact on Functional Diversity," by a team led by Catalina Pimiento of the University of Zürich.  In it, the researchers describe an enormous mass extinction that happened between two and three million years ago -- pretty close to recent, in geological terms -- and which scientists had previously been almost entirely unaware.

Mass extinctions leave a huge footprint in the geological record.  Not only does biodiversity drop dramatically from one stratum to the one immediately above it, but the drastic differences in the sorts of species you find on either side -- who were the winners and losers -- is usually an obvious marker that something enormous has happened.

Paleontologists have identified what they call the Big Five:
All of these have been well-established for over a century, although convincing explanations for the cause of each is still a subject of heated discussion.  But the much more recent extinction that was the subject of the Pimiento et al. paper, which occurred at the boundary between the Pliocene and Pleistocene Epoch, was overlooked despite its magnitude.

The end of the Pliocene marked the beginning of a period of great climatic variability and sea-level oscillations.  Here, based on a new analysis of the fossil record, we identify a previously unrecognized extinction event among marine megafauna (mammals, seabirds, turtles and sharks) during this time, with extinction rates three times higher than in the rest of the Cenozoic, and with 36% of Pliocene genera failing to survive into the Pleistocene.  To gauge the potential consequences of this event for ecosystem functioning, we evaluate its impacts on functional diversity, focusing on the 86% of the megafauna genera that are associated with coastal habitats.  Seven (14%) coastal functional entities (unique trait combinations) disappeared, along with 17% of functional richness (volume of the functional space).

A loss of 36% of the marine genera is huge.  Especially when you consider that some of the vanished species weren't exactly tiny obscure sea bugs.  One of the victims was Carcharodon megalodon, the largest shark species known, which reached a length of fifteen meters from tip to tail and weighed upward of fifty metric tons.  What seems to have hidden this event from view is that it mainly impacted marine organisms, whose remains may well have been fossilized, but most of which are still underwater (there hasn't been that much large-scale geological shift in two million years, so most Pliocene-age rocks are pretty much still sitting where they formed). 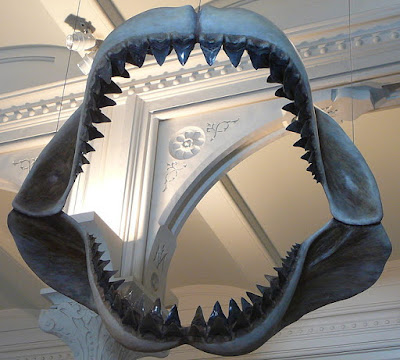 But this research also uncovered an interesting pattern in the extinction.  Warm-blooded animals were hit way harder than cold-blooded ones; consider that the event wiped out 55% of marine mammals and 35% of marine birds, but only 9% of sharks.  (For some reason, sea turtles also took a huge hit; 43% of the known species of Pliocene sea turtles were wiped out.)

The surmise by the scientists is that the Pliocene-Pleistocene Extinction was caused by large-scale sea level fluctuations altering oceanic current patterns and eradicating coastal habitat.  Climate change today seems to be aiming toward a similar target.  "This study shows that marine megafauna were far more vulnerable to global environmental changes in the recent geological past than had previously been assumed," said study lead author Catalina Pimiento.  "This also points to a present-day parallel: Nowadays, large marine species such as whales or seals are also highly vulnerable to human influences."

So here we have another cautionary tale, if we needed one.  Once again, marine mammals are at risk, but this time it's human activity that's driving the change.  Polar bears -- sometimes referred to as the "poster child for climate change" -- are likely to be extinct by 2100 if we stay on the trajectory we're on.

You have to wonder what future paleontologists will make of our age.  Will the sedimentary rocks forming today tell the story of a sudden, drastic decrease in biodiversity?  Will there be any way to tell what caused it?  Who will be the winners -- and who the losers?

And most frightening of all, will we still be around to consider the question?