Everyone knows that most living things are symmetrical, and the vast majority of them bilaterally symmetrical (i.e. a single line down the midsection divides the organism into two mirror-image pieces).  A few are radial -- where any line through the center point divides it in half -- such as jellyfish and sea anemones.  Even symmetrical organisms like ourselves aren't perfectly so; our hearts and spleens are displaced from the midline toward the left, the appendix to the right, and so forth.  But by and large, we -- and the vast majority of living things -- have some kind of overall symmetry.

True asymmetry is so unusual that when you see it, it really stands out as weird.  Consider the bizarre-looking flounder: 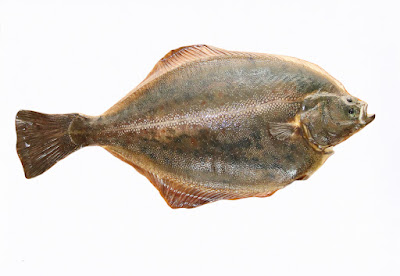 Flounders start out their lives as ordinary little fish, upright with symmetrically-placed eyes, fins, and so on.  But as they mature, their skulls twist and flatten, and they end up with both eyes on the same side of the head -- a great adaptation for a fish that spends its life lying flat on the seabed, and who otherwise would constantly have one eye pointing downward into the mud.

A question I've asked here before has to do with the constraints on evolution; which of the features of life on Earth are so powerfully selected for that we might expect to see them in life on other planets?  (An example of one that I suspect is strongly constrained is the placement of the sensory organs and brain near the front end of the animal, pointing in the direction it's probably moving.)  But what about symmetry?  There's no obvious reason why bilateral symmetry would be constrained, and it seems as if it might just be a holdover from the fact that our earliest ancestors happened to be bilateral, so we (with a few stand-out exceptions) have inherited it down through the eons from them.

What about symmetry in general, however?  If we went to another life-bearing planet, would we find symmetrical organisms, even if they differ in the type of symmetry from ours?

The answer, judging from a paper that appeared this week in Proceedings of the National Academy of Sciences, by a team led by Iain Johnston of the University of Bergen, appears to be yes.

What Johnston and his team did was analyze the concept of symmetry from the perspective of information theory -- not looking at functional advantages of symmetry, but how much information it takes to encode it.  There are certainly some advantages -- one that comes to mind is symmetrically-placed eyes allows for depth perception and binocular vision -- but it's hard to imagine that's a powerful enough evolutionary driver to account for symmetry in general.  The Johnston et al. research, however, takes a different approach; what if the ubiquity of symmetry is caused by the fact that it's much easier to program into the genetics?

Engineers routinely design systems to be modular and symmetric in order to increase robustness to perturbations and to facilitate alterations at a later date.  Biological structures also frequently exhibit modularity and symmetry, but the origin of such trends is much less well understood.  It can be tempting to assume—by analogy to engineering design—that symmetry and modularity arise from natural selection.  However, evolution, unlike engineers, cannot plan ahead, and so these traits must also afford some immediate selective advantage which is hard to reconcile with the breadth of systems where symmetry is observed.  Here we introduce an alternative nonadaptive hypothesis based on an algorithmic picture of evolution.  It suggests that symmetric structures preferentially arise not just due to natural selection but also because they require less specific information to encode and are therefore much more likely to appear as phenotypic variation through random mutations.  Arguments from algorithmic information theory can formalize this intuition, leading to the prediction that many genotype–phenotype maps are exponentially biased toward phenotypes with low descriptional complexity.

Which is a fascinating idea.  It's also one with some analogous features in other realms of physiology.  Why, for example, do men have nipples?  They're completely non-functional other than as chest adornments.  If you buy intelligent design, it's hard to see what an intelligent designer was thinking here.  But it makes perfect sense from the standpoint of coding simplicity.  It's far easier to have a genetic code that takes the same embryonic tissue, regardless of gender, and modifies it in one direction (toward functional breasts and nipples) in females and another (toward non-functional nipples) in males.  It would take a great deal more information-containing code to have a completely separate set of instructions for males and females.  (The same is true for the reproductive organs -- males and females start out with identical tissue, which under the influence of hormones diverges as development proceeds, resulting in pairs of very different organs that came from the same original tissue -- clitoris and penis, ovaries and testicles, labia and scrotum, and so on.)

So symmetry in general seems to have a significant enough advantage that we'd be likely to find it on other worlds.  Now, whether our own bilateral symmetry has some advantage of its own isn't clear; if we landed on the planets orbiting Proxima Centauri, would we find human-ish creatures like the aliens on Star Trek, who all looked like people wearing rubber masks (because they were)?  Or is it possible that we'd find something like H. P. Lovecraft's "Elder Things," which had five-way symmetry? 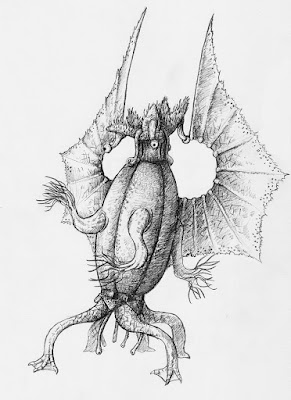 And note that even though the rest of its body has five-way symmetry, the artist drew it with bilateral wings. We're so used to bilateral symmetry that it's hard to imagine an animal with a different sort. [Image licensed under the Creative Commons Українська: Представник_Старців (фанатський малюнок)]
So that's our fascinating bit of research for today; coding simplicity as an evolutionary driver.  It's a compelling idea, isn't it?  Perhaps life out there in the universe is way more similar to living things down here on Earth than we might have thought.  Think of that next time you're looking up at the stars -- maybe someone not so very different from you is looking back in this direction and thinking, "I wonder who might live on the planets orbiting that little star."