The cities on the plain

Scary place, this universe of ours.

I've dealt here before with some cosmic-level catastrophes -- supernovas and Wolf-Rayet stars and black holes and gamma-ray bursters and false vacuums -- but the situation's not much better down here on the seemingly peaceful surface of the Earth.  There are weather-related disasters like hurricanes and tornadoes, as well as spectacular but less-known phenomena such as convective microbursts, which are not only scary and violent but strike seemingly out of nowhere, producing wind that goes from dead calm to 120 kilometers per hour in under two minutes (and are over equally quickly).  Volcanoes and earthquakes are seldom a surprise with regards to location, but are unpredictable in terms of timing -- although now with better remote sensing techniques, we're getting more accurate at forecasting quakes and eruptions, such as the one currently devastating the island of La Palma in the Canary Islands.  (The Ministry of Tourism announced that the island is "still open to tourism," adding, "You must have a valid passport, as well as proof that you are a complete idiot.")

So we're better off than the people in Pompeii in 79 C.E., or the poor folks in 1902 who were the victims of a pyroclastic eruption from Mont Pelée in Martinique, which killed thirty thousand people in less than five minutes.  There were only three known survivors, the most famous of which was in an underground jail cell at the time.  All three escaped with burns and other injuries, but at least didn't get flash-fried like the rest of the city.

I'm pretty lucky here in upstate New York.  We're not in an earthquake zone, even farther from the nearest volcano, very rarely have tornadoes, and although we sometimes get sideswiped by the remnants of an Atlantic hurricane, we seldom get anything serious.  The worst we have to contend with is snow, but even our worst storms (like the "Hundred-Year Storm" of  March 1993, eight months after I moved here from Seattle, Washington, which dropped almost two meters of snow on us in a space of 48 hours) are nowhere near as violent as the killer blizzards they get in the Rocky Mountain states and the upper Midwest.

So I can't complain.  Even though I do sometimes anyhow.

But I guess even in a relatively clement place, you never know what's going to hit you.  Sometimes literally, to judge by a paper this week in Nature by a team led by geologist Ted Bunch of Northern Arizona University, which describes the fate of the city of Tall el-Hammam in the southern Jordan Valley.

Never heard of it?  Neither had I, which is surprising considering both its prominence and its ultimate fate.  Up till about 1650 B.C.E., Tall el-Hammam was the bustling center of commerce for a region inhabited by an estimated fifty thousand people.

The authors describe it as follows:

The three largest settlements in this area were Tall el-Hammam [TeH], Tall Nimrin, and Jericho (aka, Tell Es-Sultan), urban anchors of three city-state clusters, each surrounded by numerous smaller satellite towns and villages.  At 36 hectares of fortifications (0.36 km2) and an additional 30 hectares of “suburban sprawl,” TeH at its zenith was > 4× larger than Tall Nimrin and > 5× larger than Jericho, and thus, was likely to have been the area’s politically dominant MBA [Middle Bronze Age] urban center for many centuries.  TeH was initially occupied during the early Chalcolithic Period (~ 6600 cal BP) and was a well-established fortified urban center by the Early Bronze Age (~ 5300 cal BP).  The city reached its peak of hegemony during the MBA and dominated the eastern half of the Middle Ghor and most likely, the western half as well.

Then -- suddenly -- the entire city was wiped off the map.  The entire region was abandoned for over six hundred years, and in fact wasn't substantially recolonized for almost a millennium.

Bunch et al. believe they've figured it out.  In 1650 B.C.E., Tall el-Hammam was flattened -- by a stratospheric meteorite explosion. 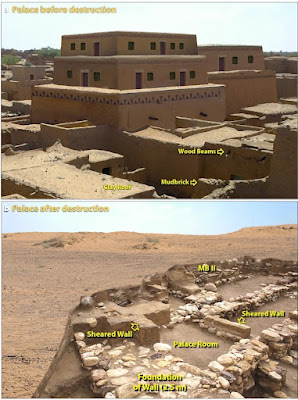 You may recall the 2013 Chelyabinsk meteor, an object an estimated twenty meters across that exploded about thirty kilometers above the surface of the Earth, creating a shock wave that damaged houses and injured an estimated 1,491 people.  The 1908 Tunguska Event was even larger, caused by an object an estimated fifty meters across, and blew down trees radially outward from ground zero, destroying over two thousand square kilometers of forest that were (fortunately) far away from any densely-occupied areas.

The one that destroyed Tall el-Hammam is estimated to be larger still -- the researchers suggest a diameter of around seventy meters.  Tall el-Hammam was, quite literally, blown away, the thick walls of the palace sheared off at the foundation.  Mud bricks and roofing clay actually melted.  Mineralogical analysis of the rocks and debris show something kind of terrifying; inclusions of high-melting-point materials like platinum, iridium, and zircon melted as well, indicating temperatures above 2,000 C (and thus ruling out such causes as city-wide conflagrations, which don't get anywhere near that hot).  Quartz granules in the rocks of the area have radial fracture patterns similar to the circular cracks in your windshield when it's hit by a flying piece of gravel, indicating that something big punched the site.

The researchers suggest that the meteor strike at Tall el-Hammam might have been the origin of the biblical story of the destruction of "the Cities on the Plain," most famously Sodom and Gomorrah, although the jury's still out on that.  It would certainly explain the suddenness and totality of the destruction described in the biblical account, although it'd still leave up in the air why Lot's wife turned into a pillar of salt.

As an aside, the meteor strike in 1650 B.C.E. is not considered a possible basis of the biblical account of the destruction of Jericho, in Joshua chapter 6; by what we know of the chronology of the history of Judea, the Book of Joshua was written nearly a thousand years later.  And it's worth mentioning that there seems to be no evidence whatsoever of Jericho experiencing a catastrophic collapse (the Bible talks about the walls of the city "falling flat") during that entire time period, leading archaeologist and biblical scholar William Dever to state that the story of the fall of Jericho was "invented from whole cloth" as nationalist propaganda by the leaders of the state of Judah to bolster their reputation as not only the Chosen Ones of God, but as all-around tough motherfuckers.  (I paraphrase Dever's actual analysis slightly.)

Anyhow, the Bunch et al. paper is a tour de force of thorough scientific investigation, and from my (admitted layperson's) perspective, it seems like they've locked down their case pretty tightly.  So now you have something else to worry about, even if (like me) you're far away from raging volcanoes, earthquake zones, and Tornado Alley, not to mention any local gamma-ray bursters and black holes.  Exploding rocks from space.  At least it'd be a quick way to go; considering the level of destruction they describe at Tall el-Hammam, we're talking "loud noise and bright light, look upward for a second, then get blasted to smithereens."

*************************************
Like graphic novels?  Like bizarre and mind-blowing ideas from subatomic physics?
Have I got a book for you.
Described as "Tintin meets Brian Cox," Mysteries of the Quantum Universe is a graphic novel about the explorations of a researcher, Bob, and his dog Rick, as they investigate some of the weirdest corners of quantum physics -- and present it at a level that is accessible (and extremely entertaining) to the layperson.  The author Thibault Damour is a theoretical physicist, so his expertise in the cutting edge of physics, coupled with delightful illustrations by artist Mathieu Burniat, make for delightful reading.  This one should be in every science aficionado's to-read stack!
[Note: if you purchase this book using the image/link below, part of the proceeds goes to support Skeptophilia!]